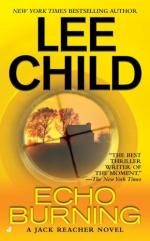 Reacher goes back into the house and tells Carmen again that she should leave. She refuses, telling him that she won't be a fugitive with Ellie because it isn't fair to her. She takes him up to see Ellie sleeping angelically in bed, and then up to her room to show him where she hid her pistol. Then she asks him to sleep with her, and Reacher refuses, but agrees to stay the night to her relief.

The killing trio move closer to Pecos. The woman has a good feel for how to remain anonymous and blend with her surroundings. They use false names, overlapping motel records and pay in cash.

Reacher wakes to the sound of Carmen showering the next morning. He gets off Sloop's sofa, and looks at a photograph in the sitting area. In it, Hack Walker, Bobby and Sloop...