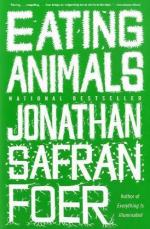 Eating Animals is a journalistic account by Jonathan Safran Foer of the eating of animals in America, and the good and bad consequences of the practice. Foer examines everything from the moral consideration of the eating of animals to the actual raising and slaughtering of animals. Foer, himself a vegetarian, notes quickly in his book that he is not writing an attempt to convince or force readers to go vegetarian, but is seeking to answer a question posed by his infant son as to why people eat animals.

Foer reflects on his own childhood, and how eating meat was something no one thought twice about. Foer himself only hesitated when a vegetarian babysitter would not eat chicken with him one evening. Foer recounts how he alternated between a regular omnivorous diet and vegetarianism through and after college. After Foer got married and had a son, he decided to adopt a puppy which quickly became a member of the family. Foer wondered at that time why it is that some animals are eaten while others, like dogs, are not. Countless theories exist as to why, but Foer believes it must have something to do with personal companionability and cultural differences, as dogs are eaten in other countries.

Foer committed to reading all the literature he could about animals, their raising, and their consumption, from government pamphlets to internet videos to books about food. Foer learned that up until 1923, the United States had long been a country dependent on family farming. Animals were lovingly raised and killed as needed for food. But in 1923, housewife Celia Steele accidentally received 500 chicks instead of the 50 she had purchased. Instead of killing them or getting rid of them, she raised them indoors through the winter with the help of feed supplements. By 1935, Steele had 250,000 chickens. By the 1930s, Arthur Perdue and John Tyson emerged on the scene to truly turn Steele’s discovery into an industry.

The result was factory farming, which spread rapidly. Factory farming is dependent upon the mass growing and slaughtering of animals to sell to millions of customers. More often than not, animals are fed unnatural diets, must live in filthy conditions in small cages, have no access to the outdoors, are often diseased, ill, or violently treated by workers, and live for mere weeks before they are killed, often while conscious. The factory farms themselves are large polluters, and are considered horrible jobs because of the animal cruelty. While factory farmers agree there is room for improvement, they argue that the old model of family farms could not feed so many people and deprive starvation. Foer explains this is true, noting that the family farms currently in America would not even supply the population of Staten Island with food.

Foer explains typical factory farm conditions have committed him to vegetarianism, but notes that there are ethical alternatives to factory farming which could thrive if consumers cared enough and were willing to be inconvenienced. These are rare factory farms that treat their animals more humanely than others; and these are family and independently-owned animal farms such as the turkey farm of Frank Reese or the cattle ranch of Bill and Nicolette Niman who treat their animals lovingly and with respect. This is especially important to Nicolette, because she is a vegetarian. It is important how people treat animals, Foer concludes, because it has everything to say about humanity and those things that matter.