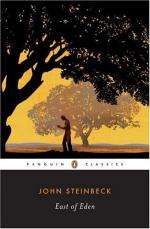 Introduction & Overview of East of Eden

John Steinbeck
This Study Guide consists of approximately 73 pages of chapter summaries, quotes, character analysis, themes, and more - everything you need to sharpen your knowledge of East of Eden.

This detailed literature summary also contains Bibliography and a Free Quiz on East of Eden by John Steinbeck.

Reviewers were quick to point out the flaws in structure and theme in this long novel, and later critics have in general not regarded it as the equal of Steinbeck's finest works. However, the story of the Trask family is a powerful, if melodramatic one, and the Hamilton chapters show Steinbeck's ability to create living characters and set them in motion is undiminished. The selection of East of Eden by Oprah Winfrey for her book club (2003) revived reader interest in this serious but entertaining novel that endeavors to lift up the human spirit in the face of everything that would destroy it. As a result of Oprah's selection, this book was reissued in a 2003 edition by Penguin publications.

More summaries and resources for teaching or studying East of Eden.

East of Eden from Gale. ©2005-2006 Thomson Gale, a part of the Thomson Corporation. All rights reserved.