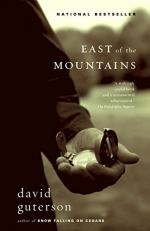 David Guterson
This Study Guide consists of approximately 34 pages of chapter summaries, quotes, character analysis, themes, and more - everything you need to sharpen your knowledge of East of the Mountains.

East of the Mountains Summary & Study Guide includes comprehensive information and analysis to help you understand the book. This study guide contains the following sections:

This detailed literature summary also contains Quotes and a Free Quiz on East of the Mountains by David Guterson.

East of the Mountains relates the story of Dr. Ben Givens, a recently widowed retired heart surgeon living in Seattle. Due to the fact he was dying of colon cancer, Ben created a plan to commit suicide and make it look like a hunting accident, so that he did not have to share his diagnosis with his family or suffer the pain of dying from the disease. The events of the story are related from a third-person, limited narrator focusing on Ben's perspective.

In Chapter 1, Ben carefully laid out everything in his home to make it look as though he was planning to come back and set out on his hunting trip with his two dogs, Tristan and Rex. However, Rex misbehaved in the car causing Ben to crash. In Chapter 2, Ben and the dogs were rescued from the car crash by a young couple named Kevin and Christine, who gave Ben a ride to a nearby campsite where they said he could hire another car.

In Chapter 3, having parted ways with the couple and having discovered that he couldn’t hire a car after all, Ben attempted to hitchhike back to Seattle. While doing this, he met a drifter who convinced him to carry on with his hunting trip. The drifter gave Ben some marijuana cigarettes to help with the pain of his colon cancer. Ben smoked one and the effects of the drug brought back memories of his childhood growing up on an orchard in Washington.

In Chapter 4, Ben recalled his childhood and his mother’s untimely death when he was 12 years old. He remembered meeting and falling in love with his wife Rachel when she came to work at his family’s orchard. They parted ways at the beginning of World War II, when Rachel went to train as a nurse and Ben began military training.

In Chapter 5, back in the present timeline, Ben was awoken from his dreaming by his dogs Rex and Tristan. The dogs ran away from Ben to join a pack of wolfhounds. The wolfhounds attacked Rex and Ben killed one of them while trying to save his dog. The owner of the wolfhounds, William Harden, found Ben and stole his shotgun as revenge for the death of his dog.

In Chapter 6, Ben tended to Rex’s wounds. He went looking for Tristan and found him dead. Ben walked with Rex in search of help, and a trucker came along and drove them to a nearby vet. In Chapter 7, Ben assisted the vet as she treated Rex’s injuries.

In Chapter 8, Ben recalled his time fighting in World War II. He remembered that seeing his friend saved by a field surgeon inspired him to become a surgeon. He recalled his marriage to Rachel when they reconnected in Europe.

In Chapter 9, Ben caught a bus and intervened to save the life of a severely ill migrant fruit picker named Angel. In Chapter 10, Ben was left alone with a friend of Angel, another fruit picker named Emilio. Ben helped Emilio find work at a place called Wolfhound Orchard, where Ben knew he could find William Harden, the man who stole his shotgun. On the way there, Ben decided that he wanted to live.

In Chapter 11, Ben and Emilio arrived at the orchard and went to sleep. Ben was awoken in the night and asked to help assist a young woman in labor because they heard he was a doctor. Ben went to her bedside and successfully delivered her baby.

In Chapter 12, the owner of the orchard, Bea Harden, thanked Ben for helping to deliver the baby. Ben told her that he came to the orchard to get his shotgun back but he didn’t want it anymore. He confronted William Harden and told him he could keep the gun. Bea drove Ben back to Seattle. Ben went into his house and called his daughter to tell her that he had come home.

More summaries and resources for teaching or studying East of the Mountains.

East of the Mountains from BookRags. (c)2022 BookRags, Inc. All rights reserved.