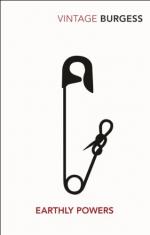 Earthly Powers by Anthony Burgess is an exercise in narcissism and self-indulgence. The main topics in the story are good vs. evil and homosexuality. The story begins in the 1970s, back tracks to 1918, and then moves forward to return to the 1970s when the main character, Kenneth Toomey is an old man.

The story begins with noted author Kenneth Marchal Toomey celebrating his 81st birthday. Toomey lives in Tangier with his secretary/lover Geoffrey Enwright. Toomey is visited by the Archbishop of Malta who requests that Toomey write about his brother-in-law, Carlo Campanati aka Pope Gregory XVII. Carlo had performed a miracle that would ensure that he be canonized in the Roman Catholic Church. Toomey was the only witness to the miracle.

Toomey struggles greatly with his homosexuality and how it wars with his values and the values of the Church. Although Toomey accepts his orientation, the Church does not, and it causes a great deal of doubt, trouble and pain for the writer. Toomey seeks advice from several church officials throughout the book, none of which is sympathetic or very helpful.

Toomey confesses to his sister, Hortense, who confides the secret in their mother. Both condemn Toomey's choices and ensure that Toomey's father never learns the truth.

Toomey becomes involved with a series of men who are either unavailable or abusive. The first lover is Val, a young man who abuses Toomey. Toomey eventually has an affair with Rodney Selkirk, a married man. Toomey is arrested for homosexual activity and flees the country shortly before his trial. Rodney dies of the flu. During this time, Toomey's mother also dies.

Toomey's father remarries and Hortense moves in with Toomey. Hortense meets and marries Domenico Campanati, a jazz musician. Domenico is the brother of Carlo Campanati, a priest who will eventually become Pope Gregory XVII.

Carlo and Domenico have another brother, Raffele, who, when fighting against the Chicago mob, is murdered.

Toomey becomes close to Carlo's mother, Concetta, a stalwart women who openly opposes the Nazis and attempts to kill Heinrich Himmler. Concetta dies and Toomey learns more about her activities through her personal effects.

Carlo continues his work and rises rapidly through the Church until he is named Pope. Carlo, a man who loves excess, lives only five years after his inauguration.

Hortense becomes a successful sculptor but suffers many personal tragedies including the dissolution of her marriage to Domenico, the death of her son, John, and the death of her granddaughter Eve. Hortense has also lost an eye in a tragic accident and spends the rest of her years working and being cared for by her lover, Dorothy.

Toomey continues to travel around the world, basking in his notoriety and often getting into trouble for his actions. Toomey is eventually mugged in Rome and moves to England to live out his days with Hortense.