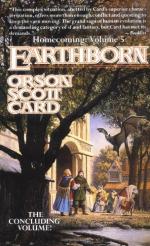 Orson Scott Card
This Study Guide consists of approximately 44 pages of chapter summaries, quotes, character analysis, themes, and more - everything you need to sharpen your knowledge of Earthborn.

"The evil humans who had joined with the Diggers and lived in their dank caves and ate the Sky people they kidnapped and murdered."
Chapter Two, True Dreams, page 2

"Akma wanted to ask his father if everything else Pabulog's sons said was true, too, but he dared not, for he wouldn't know what to do with the answer. If they were right, then his father was an oathbreaker and so how could he trust anything he said?"
Chapter One, Captivity, page 17

"'Was it - the Keeper who spoke to you?' asked Edhadeya.
'Who knows?' said Father. 'Maybe it was fatherly pride. Maybe it was wishful thinking. Maybe it was the voice of the Keeper...'"
Chapter Two, True Dreams, page 44

"As for Didul, Akma imagined a long confrontation between them: with Didul finally pleading for his life.."
Chapter Three, Resistance, page 63

"'The Truth has been hidden...

More summaries and resources for teaching or studying Earthborn.