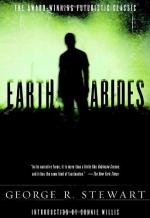 This detailed literature summary also contains Topics for Discussion and a Free Quiz on Earth Abides by George R. Stewart.

Isherwood Williams, a college student working on his thesis, is in the Black Creek Area when he finds an old miner's hammer and is bitten by a rattlesnake. He's not aware of the fact that the "acting president" of the United State has suspended governmental operations and that burials at sea in California have now been abandoned. Ish survives the snakebite coupled with something that he calls an infection then heads back toward his parent's home. On the way, he encounters no one other than a single dead body on the side of the road then finds a newspaper reporting of the crisis. Ish finds his parents gone and stays at his house on San Lupo Drive for a short time. He finds a few survivors but they seem to represent the dregs of society or have gone insane from the shock. He loads up a station wagon with supplies for a trip east, is joined by a dog he later names Princess and heads for New York City, hoping to find surviving communities along the way. His search is largely futile, and he finds only a scattered few survivors, none that he wants to settle with. He returns to San Francisco where he encounters a woman some ten years his senior named Em. They settle in together and are soon joined by a man named Ezra, the two women he's taken as wives, Molly and Jean, a simple-minded girl named Evie, and a carpenter named George with his wife Maurine. None was married before the Great Catastrophe, as Ish calls it, but all have in their way managed to adapt.

The women have children and over the years, the Tribe grows. From the stores, they have everything they need and scavenge for canned goods and supplies. Through it all, Ish clings desperately to the idea of rebuilding civilization as he knows it though he seems always to pin his hopes on someone else's actual work. Ish's youngest son, Joey, is remarkably intelligent and Ish hopes that he will be able to bring the people back to civilization. Two of the young men go on a trip and discover that the Tribes across the United States are very different with some relying heavily on religion. A visitor named Charlie brings an epidemic of typhoid and five - including Joey - die.

Ish and Em early on began numbering the years and giving them names. Ish always chiseled those names with a miner's hammer he'd found on the day the rattlesnake bit him. The Tribe comes to attach an importance on that hammer, almost of religious levels. Ish once wants to counteract that but later decides that the hammer is a harmless attachment that his people need for comfort. Ish also eventually comes to abandon the idea that he and his people will rebuild civilization and turns instead to searching for things he might teach them that will actually make a difference in the lives they live. He teaches the younger ones to make bows and arrows and to make fire without matches. By the fourth generation, the young men are skilled at both and have begun to drop their dependence on items scavenged from the area stores. Ish is pleased and when his time comes to die, he's asked to hand off the hammer. He does so, choosing his great-grandson, Jack, as the recipient.