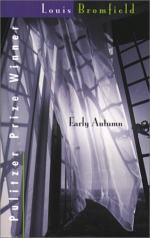 This detailed literature summary also contains Topics for Discussion and a Free Quiz on Early Autumn by Robert B. Parker.

Spenser is in his new office at the corner of Boylston and Berkley, having been among those evicted from his previous office along with a bookie and a fortune teller. He notes that he's now directly over a bank where the employees do exactly the same things the bookie and fortune teller had done, but dress better while doing it. On his desk is a photo of Susan Silverman, Spenser's girlfriend. A woman named Patty Giacomin arrives and asks to hire Spenser to retrieve her son, Paul. She says that the police are barely interested in the case of a fifteen-year-old though Patty says that Paul has been abducted by his father, Mel.

Spenser soon finds Mel through his girlfriend, Elaine Brooks, and Paul is at Mel's house. Paul is indifferent and eventually tells Spenser that his parents are equally horrible and that he simply doesn't care about either of them. Spenser returns Paul to his mother and several months later receives an urgent call from Patty, saying that an attempt was made to kidnap Paul. Spenser agrees to stay with them for awhile and helps them through two more kidnap attempts. The bottom line is that his parents want Paul only to annoy the other.

At Patty's insistence, Paul spends weeks with Spenser in a cabin near Fryeburg and the two bond as Spenser teaches Paul to become a strong, independent person. That is accomplished quickly and when Patty says she wants to hand Paul over to Mel, Paul refuses. Paul and Spenser then set out to prove that both parents are unfit, though not so that Spenser can gain custody. The goal is simply to have both leave Paul alone so he can grow into a life for himself.

The two discover that Mel has been deeply involved in an insurance scam, and Spenser uses that to force Mel to agree to pay tuition and expenses so that Paul can attend an exclusive liberal arts school where he can follow his dream to dance. They also discover that Patty's monthly visits to New York were not as she'd described but were merely an opportunity for her to get drunk, pick up a stranger in the hotel bar, and have sex. Confronted with the knowledge of those facts, Patty also agrees to stay away from Paul.

Through it all, Paul and Spenser bond though Spenser's ultimate goal is not to have Paul become dependent on him but to become an adult. Spenser says that it's not fair that Paul has to grow up so soon; after all, the boy is only fifteen. Paul confidently responds that he'll be sixteen in the early autumn. Spenser replies that Paul is much older than that.