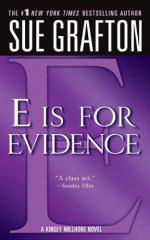 Sue Grafton
This Study Guide consists of approximately 30 pages of chapter summaries, quotes, character analysis, themes, and more - everything you need to sharpen your knowledge of 'E' Is for Evidence.

In the beginning Kinsey gets a letter from the bank stating that they received her $5,000 night deposit. She didn't make the deposit. The deposit is a cash deposit left in a night-deposit slot. Kinsey has made no night deposit and the bank says they will call her back.

The next day Kinsey is assigned a file for a big warehouse fire for a company named Wood/Warren. Kinsey gets an interview with Lance Wood, the company president. Before she goes to the interview, she looks over everything in the file and it looks like a standard claim. There aren't any extra notes saying that anything is out of the ordinary and Kinsey is confused as to why it is such a rush.

Kinsey gets to Wood/Waren and looks around the office and learns what Wood/Warren manufactures. They gross more...

(read more from the chapter 1-4 Summary)

More summaries and resources for teaching or studying 'E' Is for Evidence: A Kinsey Millhone Mystery.

'E' Is for Evidence: A Kinsey Millhone Mystery from BookRags. (c)2023 BookRags, Inc. All rights reserved.