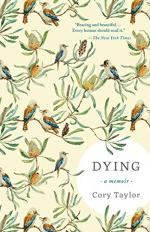 Cory Taylor
This Study Guide consists of approximately 37 pages of chapter summaries, quotes, character analysis, themes, and more - everything you need to sharpen your knowledge of Dying.

This detailed literature summary also contains Topics for Discussion on Dying: A Memoir by Cory Taylor .

The following version of this book was used to create the guide: Taylor, Cory. Dying: A Memoir. Tin House Books, 2017.

Dying: A Memoir is divided into three books titled “Cold Feet,” “Dust and Ashes,” and “Endings and Beginnings,” respectively. The books do not correspond to specific events, nor do they follow a chronological order in terms of the content they discuss, yet each one broadly explores separate ideas that the author wishes to discuss.

In “Cold Feet,” Taylor introduces herself and her illness, stage-four melanoma, which is slowly killing her. She writes about the euthanasia drug she purchased from China and outlines the misgivings and fears she has about potentially using it. She speaks of her mother’s undignified death at the hands of another terrible disease, dementia, and speaks highly of her husband and children. However, she also remarks upon her troubled relationship with her father. Taylor also describes the unfairness of watching her friend and biographer, Susan Addison, die a premature death due to a stroke, which sets Taylor off on an exploration of dying and the injustice of it. Finally, she neatly lists several myths and questions people hold about dying, such as: have her priorities changed since her diagnosis? Does she have any last regrets? Does it make her sad to know she is dying?

In “Dust and Ashes,” Taylor moves the central focus of the book from herself to her mother and father. She individually examines their histories and lives, beginning with her mother. She recalls childhood visits to her mother’s siblings’ homes in Queensland, Australia and allows the reader to catch a glimpse inside the troubled family dynamic from which her mother came, including the multiple breakdowns of her maternal grandmother, Ril, whose tragic isolation and unhappiness haunt Taylor as they once haunted her mother. Next, Taylor expresses regret about the way her and her siblings were unable to come together and coordinate proper burial services for either of their parents when they died, which she seems to think speaks to the deeply complex relationships between them and their own views on family. She then recounts her father’s early life and his love for flying, as his job as a pilot led him to drag his family around the world and ultimately ruined his relationship with his kids and severed his marriage.

In “Endings and Beginnings,” Taylor brings the focus of the book back onto herself, speaking of her pleasant childhood, in particular the time she and her mother lived in Fiji. Her father worked there but was not around often, and her siblings were in boarding school at the time, leaving Taylor and her mother alone to bond and explore the beautiful island together. Taylor expresses how her love for writing developed while she was in school there, and how she learned about desire, racism, and many other things as she witnessed the fascinating socio-political dynamics in Fiji. Ultimately, Taylor’s musings about her childhood serve to emphasize how much beauty she witnessed and experienced, and she thinks deeply of the effect that the body and consciousness have on a person, for she says the body is the truest record of all lived experiences. Taylor concludes this final book with a series of images she describes, for she says that words and phrases cannot express her thoughts as well as images can now, towards the end of her life.

Taylor’s book is written with skill and humor, but ultimately it contains expressions of grief, regret, wonder, nostalgia, and acceptance. The three books within the whole each serve to call attention to different ideas, though not different times of the author’s life.

More summaries and resources for teaching or studying Dying: A Memoir.