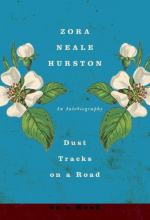 Zora Neale Hurston
This Study Guide consists of approximately 31 pages of chapter summaries, quotes, character analysis, themes, and more - everything you need to sharpen your knowledge of Dust Tracks on a Road.

Dust Tracks on a Road Summary & Study Guide includes comprehensive information and analysis to help you understand the book. This study guide contains the following sections:

This detailed literature summary also contains Topics for Discussion and a Free Quiz on Dust Tracks on a Road by Zora Neale Hurston.

This is an autobiography of a highly articulate African-American woman. She is the daughter of the Mayor of an "all Negro" town; this was a political and social intentional experiment. There was support for the endeavor from the white community; the author carefully and honestly acknowledges this. She has two married parents to start out with, but during her childhood her mother dies. When her father remarries, there is a great deal of trouble as her stepmother does not truly embrace the children. The remarriage is destroyed when Zora wins a brawl with her stepmother and to the woman's horror, Zora's father does not intervene. The woman leaves him after that. After this event, the man's children are somewhat scattered, though not entirely lost. They are somewhat forced to make their way prematurely in the world.

Zora is an African-American woman who was born at the very end of the 19th century. She was quite gifted, a talented writer capable of writing stories that others thought impossible due to her racial heritage. Despite this, her financial and familial situations thwarted her progress. She had to leave school and work from age 14 -19 and as a consequence completed secondary school when a grown woman. Her gifts and talents are largely stifled by lack of education for many years, but somehow allies find her and help get her on the road to success. She spends years traveling and chronicling African-American folk-tales. First she heads to Alabama, then to New Orleans, then finally on to Nassau, in the Bahamas. These travels give her broad experience in the many types of trials and travails faced by African-Americans in her era. In spite of this, however, her stories did not tend towards the political in tone. She does give her opinions and feelings about race relations, both within and without the African-American community, but that is not her focus.

This story traces her life from its humble beginnings all the way to her prominence as a figure in the Harlem Renaissance.

More summaries and resources for teaching or studying Dust Tracks on a Road.

Dust Tracks on a Road from BookRags. (c)2022 BookRags, Inc. All rights reserved.