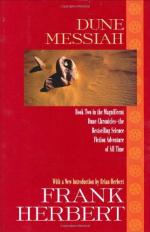 Frank Herbert
This Study Guide consists of approximately 50 pages of chapter summaries, quotes, character analysis, themes, and more - everything you need to sharpen your knowledge of Dune Messiah.

This detailed literature summary also contains Topics for Discussion and a Free Quiz on Dune Messiah by Frank Herbert.

Dune Messiah by Frank Herbert continues the cosmic drama of Dune, taking up the action in the frustrating twelfth year of the Emperor Paul Atreides' reign. It follows a treasonous plot that fails to overthrow him but leaves him blind physically and psychically, walking off into the desert and timeless immortality as the "Muad'dib."

Dune Messiah opens with a band of conspirators plotting against the Emperor Paul Atreides in the twelfth year of his reign. The Reverend Mother Gaius Helen Mohiam, a Tleilaxu Face Dancer named Scytale, and a Guild Steersman named Edric labor to win over Paul's wife, the Princess Irulan, from whom the Emperor withholds a child in favor of his beloved Fremen concubine, Chani. At stake is preservation of a gene pool the Bene Gesserit sisterhood has long cultivated.

Scytale takes on the guise of Paul's long-dead friend, Duncan Idaho, to pump a veteran for information about Paul's Keep (fortress/palace), then treacherously murders the veteran and his blind son, and makes off with the son's would-be fiancye, whose remains later turn up in the desert. Meanwhile, at an Imperial Council meeting, Chani doubts she can provide an heir and suggests Irulan be allowed to do so, but Paul protests that Irulan is too loyal to the Sisterhood. Alia, prescient since undergoing the "Water of Life" crisis in utero, shares Paul's agony over the bloody Jihad. The repugnant Korba the Panegyrist represents the Qizarate, administrators of the Jihad, on Council.

The Spacing Guild insinuates Edric into the court by naming him ambassador, and Edric presents Paul a "ghola," Hayt, the re-animated flesh of his late friend, Idaho. Paul accepts and uses Hayt cautiously. From the ship that brings Edric, Paul seizes and imprisons Mohiam, Irulan's former teacher. When Irulan tardily reports Chani is pregnant, Mohiam orders her to murder or abort Chani's baby and find a means of bringing the Atreides siblings together. The genetic program must be put back on track. Alia feels her budding sexuality sharpening, but the man of her destiny remains hidden until she is thrown together with the ghola on an assignment to examine a body found in the desert. Alia and her pilot, in the course of a long verbal duel - and a kiss - find themselves drawn together. Paul takes a massive dose of spice to clear his muddied vision, foresees Chani's death in childbearing, and summons Mohiam, not to execute her as she fears, but to propose a compromise: Chani will bear his heir, but Irulan may be artificially-inseminated to preserve his genes. Paul's intense love for Chani suggests leverage, which the conspiracy can exploit.

Chani learns about Irulan's treachery in giving her contraceptives for years and demands revenge, but allows Paul to calm her. Idaho continues struggling to overcome his ghola programming, and Paul plays cat-and-mouse with Scytale, who has assumed his most perfect disguise, the slain Fremen girl, Lichna. Paul plays along, donning a disguise to visit her father, Otheym, who gives Paul his nervous, data-packed mentat dwarf, Bijaz. Soon after they depart, an atomic blast consumes the neighborhood, leaving Paul and countless others eyeless. His other senses adapt and cooperate with prescience to give him perfect vision that amazes all who see it in action. Korba is put on trial, where he reveals the religious establishment's involvement. Hayt is sent to interview Bijaz, who puts him into a trance and administers a verbal "trigger" for an assault on Paul. After Hayt helps Alia ride out a massive spice overdose, they fall in love.

In the desert, as Paul has foreseen, Chani gives birth and dies. Idaho's humanity prevails over the Tleilaxu conditioning, and he helps Paul resist abdicating in exchange for Chani's restoration. Scytale and Bijaz are slain. Paul arranges for a repentant Irulan to care for his twins, suggests the traitors not be executed, turns over the government to Alia (who promptly executes the traitors), and walks, blind, but free, into the desert - and into timeless immortality as the Muad'dib. Idaho is united with a bitter and grieving Alia.

More summaries and resources for teaching or studying Dune Messiah.