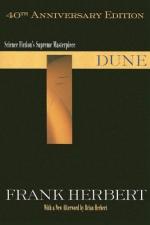 Frank Herbert
This Study Guide consists of approximately 89 pages of chapter summaries, quotes, character analysis, themes, and more - everything you need to sharpen your knowledge of Dune.

This detailed literature summary also contains Topics for Discussion and a Free Quiz on Dune by Frank Herbert.

Dune is the story of an "offworld" noble Family. Their world is violently shattered, but their young scion adapts to the ways of his new planet, assumes religious and military leadership, optimizes his powers of prescience to see the plot against him, and utterly defeats his foes.

The Emperor Shaddam IV orders House Atreides from its water-rich ancestral home, Caladan, to the desert planet Arrakis, also known as Dune. Paul Atreides, by age 15, is adept at the mental and physical training provided by his Bene Gesserit mother, Jessica, and the famed warriors Gurney Halleck and Duncan Idaho. Paul passes a test of his humanity administered by Jessica's former teacher, and could be the expected "Kwisatz Haderach, the one who can be many places at once". Meanwhile, on the planet Giedi Prime, the Duke's cousin, the obese Baron Vladimir Harkonnen, whose House Shaddam ousts from rich Arrakis, plots against the Atreides. The Imperial Planetologist, Liet-Kynes, feels strangely drawn to the Atreides, and guides them on a flight, during which they rescue men from an enormous sandworm. Mentat Thurfir Hawat, a long-time Atreides retainer, believes Jessica is a traitor, when in fact it is Dr. Wellington Yueh, whose wife is a Harkonnen hostage. The Harkonnens strike - augmented by Imperial Sardaukar troops - capturing the three Atreides, but Yueh arranges for Paul and Jessica's escape and plants a poison-gas tooth in Leto's jaw to assassinate the Baron. The plot fails.

Alone in the desert, facing defeat, Paul matures overnight. His genetics, training, and the effects of melange spice combine to show him the future and past. Hawat joins the Harkonnens and begins playing the ends against the middle. Halleck joins a smuggler band and vows revenge on Jessica and the Harkonnens. Idaho dies defending Paul and Jessica, and Kynes is taken prisoner after helping them escape. The relationship between Jessica and Paul shifts as Paul's powers increasingly frighten her. They survive a sandstorm, an avalanche, and a giant worm, but are nearly slain for their water by Fremen. Paul fights a deadly duel and finds prescience and his mother's attitudes increasingly bothersome as the Fremen adopt them. Jessica becomes a Reverend Mother, as does, unwillingly, the fetus in her womb. The Harkonnens press Arrakis hard. Paul, despite fears of a jihad being launched in his name, and Jessica, newly armed with a Reverend Mother's full powers, are ready to lead the rebellion.

The Baron wants his nephew, Feyd-Rautha, to sit in time on the Imperial Throne. Hawat tells the hated Baron that the Emperor fears a prophet, "Muad'Dib," stirring up a potent fighting force in the desert. Once Paul masters and rides a sandworm, all expect him to take Stilgar's place after a fight to the death. Halleck returns to Atreides service when Paul's band captures a team of smugglers. Halleck still suspects Jessica, and only shrewd psychology and close reasoning allow Paul to avoid killing Halleck when he grabs and threatens his mother. The same techniques work on the Fremen crowds to prevent a showdown with Stilgar. They can afford only to spill Harkonnen blood. Paul seems to be maturing until, on a whim, he drinks the Water of Life. After three weeks in a coma, Paul awakens as the Kwisatz Haderach. He sees the Emperor and Great Houses gathering to plunder Dune, restrained only by the knowledge that Paul can destroy forever the universe's only source of the spice melange - the key to space travel, prescience and longevity. Paul uses atomics to blow a hole in the Shield Wall, through which the well-trained Fremen ride on wormback, overwhelming Imperial and Harkonnen forces. Paul returns symbolically to the building from which he and Jessica have fled. Paul lays down to the Emperor surrender terms, which include exile and giving him Princess Irulan's hand. It is a political marriage, for Chani holds Paul's heart. Paul and Feyd-Rautha fight to the death, and Jessica makes peace with Chani, saying that they, though only concubines, will be remembered by history as noble wives.

More summaries and resources for teaching or studying Dune.