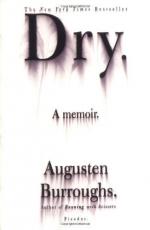 Augusten Burroughs
This Study Guide consists of approximately 29 pages of chapter summaries, quotes, character analysis, themes, and more - everything you need to sharpen your knowledge of Dry.

This detailed literature summary also contains Topics for Discussion and a Free Quiz on Dry by Augusten Burroughs.

Augusten Burroughs is an advertising executive in New York City. In the nonfiction book "Dry" he details his struggles with alcohol. When he was thirteen, his mother gave custody of him to her psychiatrist. He grew up in a dysfunctional family with no rules and no school. He is able to land an advertising job based on his talent when he is nineteen. He is now twenty-four and living in an apartment in New York. Augusten is frequently hungover at work, and eventually his co-worker Greer complains and he is ordered to rehab. Augusten agrees to go to the Proud Institute, a gay rehab establishment. Augusten tells his best friend, George Stathakis, whom he calls Pighead, that he is going to rehab. Pighead, who is HIV positive, thinks it's a good idea. His friend Jim thinks the idea of going to rehab is funny. At rehab, Augusten stays for 30 days and faces the fact that he drinks too much. He meets Hayden, a crack addict and alcoholic, and they become good friends.

Augusten Burroughs returned to his apartment in New York City and goes to see Pighead, who tells him he looks very different and much healthier. Augusten needs to leave because he has to go to a meeting. He has been sober for thirty days. At his group therapy session, he meets Foster, a crack addict and alcoholic who lived with an abusive British man named Kyle. Augusten is attracted to Foster. Hayden tells him he is leaving rehab tomorrow and asks if he can come stay in New York City with Augusten. Augusten learns his agency is one of the finalists for the Wirksam beer account. When Augusten goes to see Foster, he thinks he may be smoking crack again, but Foster says he's just been tired. At group therapy, Augusten finds out Foster's been smoking crack for a month and has quit the group. Augusten goes to see Foster, who apologizes. The two sleep together. Augusten gets word that Pighead is in the hospital. Augusten spends a lot of time taking care of Pighead and neglects to go to therapy and Alcoholics Anonymous meetings. Pighead takes a turn for the worse and dies, and Augusten falls off the wagon. He drinks and does drugs until he gets alcohol poisoning. Pighead had ordered a gold pig head with a message to Augusten to stop drinking. Augusten gets this after Pighead dies. Augusten eventually reclaims his sobriety. He and his friend Jim come out of an Alcoholics Anonymous meeting. A streetlight that always goes on when Augusten passes goes on, and Augusten thinks it's Pighead saying hello to him.

More summaries and resources for teaching or studying Dry.