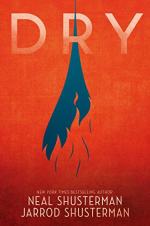 Neal Shusterman
This Study Guide consists of approximately 58 pages of chapter summaries, quotes, character analysis, themes, and more - everything you need to sharpen your knowledge of Dry.

This detailed literature summary also contains Quotes and a Free Quiz on Dry: A Novel by Neal Shusterman.

Alyssa Morrow's family is caught completely off guard on the day the water stops flowing into their home. They quickly learn that the problem is not with their plumbing. A water shortage has abruptly reached crisis level. The entire region is without water. By the time they figure out that this is not a short-term issue, they are too late to stock up on water from the local store. Alyssa realizes that ice will melt into water. She decides to load her cart with bags of ice. However, people have begun to panic. Alyssa only manages to get the ice out of the store with the help of her Uncle Herb. Alyssa's neighbor, Kelton McCracken, helps carry the ice inside. He assures Alyssa that he does not need any of the ice because his family has a tank of their own and still has water available.

When government officials announce that desalination machines are being setup on a nearby beach, Alyssa's parents go there in the hope of getting water. They do not return and Kelton spends the night at Alyssa's house, providing security for Alyssa and her younger brother, Garrett. The next day, they ride bicycles to the beach and discover that the desalination machines did not work out. They have a chance encounter with some boys who are desperate because of their dehydration and see hundreds of cars in gridlock on the highways. Kelton's parents are preppers and Kelton – against his father's wishes – provides antibiotics for a girl named Jacqui and allows Jacqui, Alyssa, and Garrett to spend a night with them. Kelton's father announces that they will soon be leaving for their “bug-out,” a shelter in the forest that is stockpiled with the necessities, where the family will ride out this crisis. Before they can leave, however, the neighbors storm the house, desperate for the water Kelton's father has but refuses to share. When the back door opens, Kelton's father fires his gun only to discover it is Kelton's brother, Brady. With Brady dead on the kitchen floor, the situation erupts into chaos. Alyssa and Jacqui drag Kelton away from the scene. The three, with Garrett, set out for the bug-out but Kelton says they need a truck to reach it.

Alyssa's Uncle Herb has such a truck and they go to Herb's in the hope of borrowing it. They discover that Herb and others in the neighborhood contracted dysentery from drinking tainted water, and that Herb traded his truck to a teenager in the neighborhood for bottled water. The teen, Henry, agrees to let Alyssa's group use the truck if they take him along. They travel off-road for a full day and are desperate for water by the time they reach the bug-out. Instead of the salvation they believe awaits them, they discover that Brady had been living in the bug-out, and had consumed the food and water stored there. Kelton knows that a reservoir is only a few miles away, and they set out in that direction. When two men attack the group, Kelton shoots and kills them both. The members of the group split up, leaving Kelton, Alyssa, and Garrett together but racing to outrun a forest fire. Just when their thirst gets the best of them, a fire-fighting plane sees them and – against orders – the pilot drops his payload of water on the three, saving them from the fire and providing life-giving water.

The novel closes with Alyssa and Kelton preparing to go to a nearby hospital where Jacqui has listed Alyssa as her next-of-kin. Alyssa assures Kelton that he was justified in killing those two men, and that his actions saved them. Alyssa and Kelton also agree that they will remain friends, and look with hope toward the future.

More summaries and resources for teaching or studying Dry: A Novel.