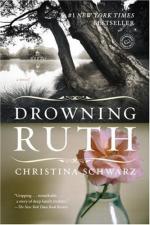 Christina Schwarz
This Study Guide consists of approximately 51 pages of chapter summaries, quotes, character analysis, themes, and more - everything you need to sharpen your knowledge of Drowning Ruth.

Clement leaves wife Theresa in bed to contemplate his break-up with Amanda. It is worse than with most of his lovers. He has convinced Theresa to invest in lakefront property on Amanda's lake to be near her. They are building an impressive summer house. The Army has dropped his vacuum box idea and Theresa is patronizing about money and cold over his other women. He wonders why Amanda has a little girl with her and is so angry. Theresa enjoys having Arthur to herself all day as she raises money for the public library, talking with snooty prospective donors about children's prospects, summer houses, and social clubs. Her interest in building the house is that it keeps Clement from straying.

Chapter 5 examines the break-up and why the Owenses are at Nagawaukee Lake at the time of Mathilda's drowning...

More summaries and resources for teaching or studying Drowning Ruth.