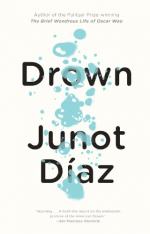 Junot Díaz
This Study Guide consists of approximately 24 pages of chapter summaries, quotes, character analysis, themes, and more - everything you need to sharpen your knowledge of Drown.

Drown is narrated by an unnamed protagonist living in a low-income neighborhood in New Jersey. The story alternates between a present-day timeline and a timeline that takes place two years prior. The protagonist is about 19 years old and lives with his mother. He helps with household expenses by illegally selling marijuana. At the beginning of the story, the protagonist’s mother tells him that his friend Beto has returned to town after his second year of college. However, the protagonist has not seen Beto in two years and does not wish to see him now. The protagonist remembers how he and Beto used to pass the time by committing small crimes such as shoplifting and acts of vandalism. Two years ago, Beto was about to graduate from high school, while the protagonist still had one year of high school remaining.

One day, when the protagonist returns from a run, he finds his mother talking to his father on the phone. His father left them at some point in the past two years, and he now lives in Florida with another woman. The protagonist dislikes his father and disapproves of his mother speaking to him. The protagonist then recalls how he would often skip school to watch television or to go to the mall to the library, while Beto rarely skipped school. Beto sometimes went to other towns to spend time with friends of his who lived there. In the present day, the protagonist sometimes goes to bars with other friends of his. As they drive home, they often pass a gay bar and shout curses or threats at the patrons.

A few weeks before Beto left for college, Beto and the protagonist watched a pornographic film together, and to the protagonist’s shock, Beto touched the protagonist’s penis in a sexual way. Two days later, Beto fellated the protagonist. The narrative implies that the proaognist stopped spending time with Beto due to these homosexual tendencies. The protagonist fears that he will be stuck in the same neighborhood for the rest of his life, while Beto is attaining new opportunities due to his postsecondary education. At the end of the story, the protagonist returns home and watches a movie with his mother.