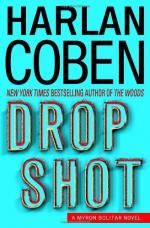 The sports agency owned and operated by Myron Bolitar and his associate Esperanza Diaz. Myron had started the agency after his professional basketball career was cut short by a knee injury.

The wrestling organization that Esperanza Diaz was a member of, wrestling as Little Pocahontas, the Indian Princess.

The location of the US Open, where Duane Richwood is competing, located in Queens, New York.

The apartment building near Greenwich Village in New York, where Duane Richwood lives with his girlfriend, Wanda.

A suburb in New Jersey, Cherry Hill is...