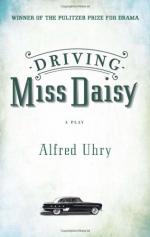 Alfred Uhry
This Study Guide consists of approximately 44 pages of chapter summaries, quotes, character analysis, themes, and more - everything you need to sharpen your knowledge of Driving Miss Daisy.

Carson McCuller' s novel The Heart is a Lonely Hunter (1940) draws on the Southern gothic tradition of American literature. The novel's protagonists including a man who is deaf and mute, an African-American doctor, and a widower all live in a Georgia mill town and are drawn together by their outsider status.

Lorraine Hansberry's three-act play A Raisin in the Sun (1959) explores what happens in 1940s Chicago when an African-American family attempts to move into an all-white neighborhood. This drama reflects Hansberry's own experiences of racial harassment.

Driving Miss Daisy from Gale. ©2005-2006 Thomson Gale, a part of the Thomson Corporation. All rights reserved.