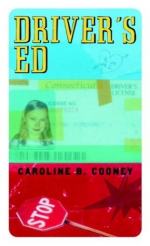 Caroline B. Cooney
This Study Guide consists of approximately 38 pages of chapter summaries, quotes, character analysis, themes, and more - everything you need to sharpen your knowledge of Driver's Ed.

"'Calm down, said Mr. Fielding. 'It's no big deal. Nobody's dead.' That was the dividing line between big deal and little deal? Death?" Chapter 1, p. 15

"'Kid,' proclaimed Mr. Willit in a huge, rolling voice, "this is your year. I am going to make you normal. Nobody else here is going to achieve this pinnacle of success."' Chapter 2, p. 22

"Do they let killers run pageants? Thought Morgan The thing is not to think about it. If I think about it, somebody might see it in my eyes. Be able to tell what I did. So I won't think about it." Chapter 5, p. 75

More summaries and resources for teaching or studying Driver's Ed.