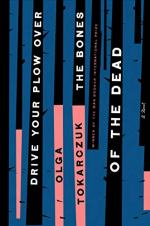 Olga Tokarczuk
This Study Guide consists of approximately 32 pages of chapter summaries, quotes, character analysis, themes, and more - everything you need to sharpen your knowledge of Drive Your Plow Over the Bones of the Dead.

Drive Your Plow Over the Bones of the Dead Summary & Study Guide includes comprehensive information and analysis to help you understand the book. This study guide contains the following sections:

This detailed literature summary also contains Quotes and a Free Quiz on Drive Your Plow Over the Bones of the Dead by Olga Tokarczuk.

The following version of this book was used to create this study guide: Tokarczuk, Olga. Drive Your Plow Over the Bones of the Dead. Translated by Antonia Lloyd-Jones. London: Fitzcarraldo Editions, 2019.

The novel opens in modern-day Poland in an unnamed village near the Czech border. Janina is a semi-elderly woman who lives alone in a cabin in the woods. She used to have two pet dogs, but they went missing. She is a retired engineer and teacher. One day, Janina’s friend and neighbor—whom she calls Oddball—tells her that he has found their neighbor—whom Janina calls Big Foot—dead in his cabin. Janina is horrified but is also somewhat glad that Big Foot is dead. he died from choking on a deer bone. The deer was one that Big Foot hunted, killed, cooked, and ate. Janina loves animals, and Big Foot was an avid hunter. Janina is a devout believer in astrology, and she thinks that maybe she can use Big Foot’s horoscope to determine his cause of death. The police begin to investigate the death but are unconvinced that it is a homicide. Janina sends letters to the police stating the theory that animals may have killed Big Foot out of vengeance. The police ignore the letters.

One day, the police chief—whom Janina simply refers to as the Commandant—is found dead in his car by Janina’s friend Dizzy. Dizzy fetches Janina to survey the crime scene. It is unclear if he died from an accidental car crash or if he was murdered. The Commandant was also an avid hunter, and Janina continues to advocate for the theory that animals are taking revenge. She spends time with her friends Dizzy and Oddball, who are deeply skeptical of her theory. Janina and Dizzy both love the work of English poet William Blake, and they enjoy translating his poems into Polish. The police call in Janina for questioning since she was one of the first people to see the Commandant’s body. A police officer remarks that Janina seems to value animal life more than human life. Janina responds that she values them equally.

One day, the village’s wealthiest resident—a man named Innerd—suddenly goes missing. People believe that he may have run off with his mistress. Around the same time, an entomologist named Borys (spelled ‘Boros’ by Janina) arrives in the village. He is studying endangered beetles and trying to petition the Polish government to protect these endangered beetles. Janina offers to let Boros lodge in her home, and Boros accepts the offer. Eventually, Innerd is founded dead in the woods. A few weeks later, the president of a local social club is found dead; he was also a known hunter. Janina refers to him simply as the President. Around this time, romance begins to grow between Janina and Boros.

One day, a new Catholic church opens in the village. It is led by Father Rustle, a local Catholic priest. Father Rustle greatly admires the local hunters, and he even hunts with them sometimes. Janina protests one of his sermons. A few days later, the church burns down and Father Rustle is found dead. The police and villagers then conclude that Janina must be the murderer. Janina’s friends confront her, and she confesses that she murdered the Commandant, Innerd, the President, and Father Rustle. She did not murder Bigfoot. Oddball did in fact die from choking on a deer bone. When Janina and Oddball were in Big Foot's house in the first chapter, Janina found a photograph that proved that Big Foot, the Commandant, Innerd, the President, and Father Rustle killed Janina's dogs while hunting. This revelation motivated Janina to kill the remaining four men. Janina then flees Poland to begin a new life in the Czech Republic.

More summaries and resources for teaching or studying Drive Your Plow Over the Bones of the Dead.

Drive Your Plow Over the Bones of the Dead from BookRags. (c)2022 BookRags, Inc. All rights reserved.