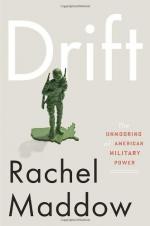 Rachel Maddow
This Study Guide consists of approximately 22 pages of chapter summaries, quotes, character analysis, themes, and more - everything you need to sharpen your knowledge of Drift.

This detailed literature summary also contains Topics for Discussion on Drift: The Unmooring of American Military Power by Rachel Maddow.

"Drift: Unmooring of American Military Power" is a non-fiction book by Rachel Maddow. This book looks at how the use of the military has changed over the past fifty years, moving away from the intent of the Founding Fathers. Ms. Maddow examines the use of the military by presidents beginning with Lyndon Johnson and Vietnam and ending with Obama's use of private enterprise and the CIA to do what has been traditionally the military's job. Drift is an eye-opening look at the military and ways in which we, as a nation, can return to the peace inspired design of the Founding Fathers.

Ms. Maddow begins her book by describing how America adored the military in the years after World War II, going so far as to incorporating this love into action figures. However, the mood began to shift as America became involved in the conflict in Vietnam. President Johnson wanted to avoid going to Congress and declaring war on Vietnam, so he chose not to call up the reserves. This gave Johnson the ability to increase America's presence in Vietnam without handing over control to Congress. This led to a restructuring of the military to take away the President's ability to go into a conflict without calling up the reserves. It also changed laws that allow the President to commit the military to a conflict without discussing it with Congress if he could not remove the military within sixty days.

When Ronald Reagan opposed Ford in the Republican primaries in the late seventies, he used untruths about the Panama Canal to engage the American public and win more states than had previously been predicted. Although Reagan lost this particular election, he returned four years later with the memory of this win strong in his mind. Reagan continued to use the idea of beefing up the military and promoting America as a strong military presence to win his bid for the Presidency.

Once President, Reagan developed the opinion that the President alone should be allowed to declare war. With this attitude, Reagan ordered the invasion of Grenada, an action that was unnecessary and badly planned and executed. At the same time, Reagan became involved with the Contras in Nicaragua in an attempt to stop the spread of Communism. In an attempt to get around the laws that required him to inform Congress of his actions, Reagan sent in the CIA rather than the military and began to use private money to fund the effort. At the same time, Reagan became involved with the Iranians in a quiet attempt to rescue American hostages in Beirut. This would include the selling of weapons to Iran, but fail to release any hostages. In the end, Reagan and his staff faced hearings in front of Congress and potential jail time.

When Bush took office, conflict in Iraq began. Bush sent troops to Kuwait in order to force the Iraqi leader, Sadaam Hussein, out of Kuwait. Bush did this without the approval of Congress, but when faced with a deadline and the inevitability of conflict, Bush finally did as he was directed by the law, he presented his case to Congress and gained the permission he needed to lead the NATO forces again Hussein.

The use of the CIA has also expanded since Reagan's time. Like Reagan, presidents after him have begun to use the CIA in military situations. Obama is known to have used the CIA to pilot drones, aircraft used specifically to assassinate targets all over the world. This takes away the culpability placed on military personnel.

The author suggests multiple ways to return the military to the Founding Father's intentions at the end of the novel.

More summaries and resources for teaching or studying Drift: The Unmooring of American Military Power.