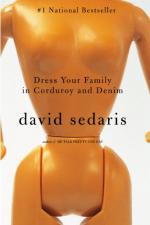 Related Topics
Let's Explore Diabetes With Owls
When You Are Engulfed in Flames
Theft by Finding: Diaries
Calypso
Happy-Go-Lucky

Dress Your Family in Corduroy and Denim Summary & Study Guide

Dress Your Family in Corduroy and Denim Summary & Study Guide includes comprehensive information and analysis to help you understand the book. This study guide contains the following sections:

This detailed literature summary also contains Topics for Discussion on Dress Your Family in Corduroy and Denim by David Sedaris.

"Dress Your Family in Corduroy and Denim" by David Sedaris is a collection of episodes from the author's life. Growing up in his very early days in upstate New York and later in Raleigh, North Carolina, David gives the reader insight into his life with his large family, his relationships with his parents, and with some of his many siblings. While the main focus of this book is on David's childhood and adolescence, some stories in this collection are from his adult life which includes episodes about his relationship with long-time partner, Hugh.

As David looks back on his younger years, he more clearly understands the destructive nature of his mother and father's parenting style than when he was actually living it. He brings adult prospective to the many times he was abandoned by them and felt like an outcast in his own home. It is obvious that David loved his mother, Sharon, and saw good qualities in her. Sharon never met a stranger and was at ease speaking with just about anyone. She could read people well and her intuition about them was often spot on. However, she often displayed a remoteness toward her own children and had a penchant for relentlessly criticizing them.

In one incident, Sharon shoved David and all his little sisters outside to play in the snow. The kids were all off from school on snow days and were apparently driving her crazy. She locked the door and after two hours when the kids were nearly frozen, she refused to open the door and let them back in. Even after David pounded on the door and pleaded with her, she chose to ignore them. When he peeked in the window, he saw that she was sitting at the kitchen table with a large bottle of wine - something he and the other kids observed quite often. Sharon apparently struggled with alcoholism for many years, which contributed to her failures as a parent.

As for Lou, David's father, was concerned, he always promised more than he could deliver. He got his wife and kids excited about the prospect of buying a family vacation home at the beach. They even looked at several houses. But when push came to shove, he started talking it down. The dream of a vacation home for the entire family turned into a bar for him in the basement rumpus room. Many broken promises led to his kids having a deep-seated distrust in their father, not to mention the pain they suffered over the many disappointments that had to endure over the years.

Both parents were guilty of assigning labels to their children. Lisa was the eldest and was expected to graduate from college and earn a masters' degree. When she dropped out of college after two years, she was a huge disappointment to her parents and had to live with being a failure. Sharon and Lou didn't expect much from David and he lived up to that low bar for many years. They had no idea that they had a budding writer in their midst. Their lack of support made it difficult for David to build the self-esteem that was crucial in allowing his talents and abilities to eventually emerge.

Dress Your Family in Corduroy and Denim from BookRags. (c)2022 BookRags, Inc. All rights reserved.