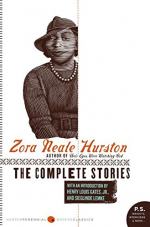 Zora Neale Hurston
This Study Guide consists of approximately 24 pages of chapter summaries, quotes, character analysis, themes, and more - everything you need to sharpen your knowledge of Drenched in Light.

This detailed literature summary also contains Quotes and a Free Quiz on Drenched in Light by Zora Neale Hurston.

The story takes place in the 1920s in rural Florida. Isis is an eleven-year-old African-American girl who lives in a small house with her father, her brother, and her grandmother. Isis is energetic, extroverted, and loves to daydream. Her favorite pastime is greeting people who pass by on the road in front of her home. However, Grandma Potts—the mother of Isis’s deceased mother—values strict focus on the immediate exigencies of daily life. At the beginning of the story, Grandma tells Isis to rake the front yard instead of greeting passersby on the road. Isis begrudgingly complies and later plays with the family dogs, but Grandma Potts tells Isis to instead sit quietly on a chair on the porch.

Later, Isis is washing dishes when Grandma comes inside and sits down on a chair to sew. She soon falls asleep, and Isis tries to do her a favor by shaving Grandma’s chin whiskers. Grandma awakes, sees Isis with the razor, and runs scared from the house. Soon after, Isis hears the sound of a parade passing by the house. It is a parade organized by a local social club. Isis dresses herself in a tablecloth from the house, and she joins the parade. She dances, and soon all of the parade participants are watching her with delight. A car passes; it contains one white woman and two white men. The white people stop their car, also delighted by Isis’s performance. Grandma soon arrives in pursuit of Isis and the tablecloth. Isis panics and flees into the nearby woods.

Isis eventually arrives at a creek next to a smaller road. She plays in the water, and the white people happen to pass by in their car. They are headed to a nearby hotel, and they are delighted by Isis’s extroversion and her performative nature. They invite her to come to the hotel with them. Isis accepts the offer excitedly and enters their car. When the car passes Isis’s home, Grandma sees the tablecloth and calls angrily to Isis. The car stops, and the white woman gives grandma five dollars, which was five times what the tablecloth had cost. Grandma, ecstatic at the gift, agrees to let Isis go with the white people to the hotel.

More summaries and resources for teaching or studying Drenched in Light.