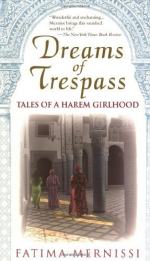 Fatema Mernissi
This Study Guide consists of approximately 31 pages of chapter summaries, quotes, character analysis, themes, and more - everything you need to sharpen your knowledge of Dreams of Trespass.

Dreams of Trespass: Tales of a Harem Girlhood Summary & Study Guide includes comprehensive information and analysis to help you understand the book. This study guide contains the following sections:

This detailed literature summary also contains Topics for Discussion and a Free Quiz on Dreams of Trespass: Tales of a Harem Girlhood by Fatema Mernissi.

Fatima is born in a harem and her childhood is filled with the love and laughter of that lifestyle but is shaped by her mother's desire that her children have more freedoms than life in a harem allows. Fatima is born just an hour after her cousin, Samir, and her mother immediately defies tradition by insisting that there be a joyous celebration over the births of both children, not just the boy child. This is typical of Fatima's mother and she teaches Fatima that she must stand up for herself if she wants things in life.

Fatima, her younger siblings, her mother and father make up one wing of the household along with some relatives, usually divorced or widowed. Another wing of the house consists of Fatima's paternal uncle, his wife and children, including Samir. The matriarch of the family is Fatima's maternal grandmother who is very traditional, takes the words of the men as law and hates Fatima's mother for her forward and rebellious thinking. Fatima's mother has support from several of the women in the harem, including Fatima's cousin Chama who is openly rebellious. A divorced aunt who lives in the harem, Aunt Habiba, also believes in Fatima's mother's arguments but because of her precarious situation in the household, is unable to publicly support them.

Fatima's maternal grandmother is Yasmina who lives in a rural harem with her husband and his group of wives. Yasmina, though personally living in the confines of a harem, also bucks tradition on many minor points. She tells Fatima about the role of harems in society and predicts that Fatima's life will be better than that of Yasmina or Fatima's mother. Yasmina says that Fatima will be educated and the first step toward that occurs when nationalists create schools that accept young women and encourage girls to attend. Fatima's mother immediately petitions her husband to allow Fatima to transfer to that school and the family council permits all the girls to go. There, Fatima has her first taste of freedom, walking the distance between her gate and the school and feeling the power of being allowed to open doors to enter and leave rooms, which are freedoms forbidden by life in the harem.

Meanwhile, Fatima ages and matures. She studies the stories and lives of those around her, taking advice such as that offered by a servant named Mina who tells Fatima that she must always draw on her own strength. From her cousin Chama, Fatima learns about magic, incantations meant to create love or to keep love alive in a relationship. From her mother, she learns to desire freedom for herself and to imagine a life that is filled with happiness.

Dreams of Trespass: Tales of a Harem Girlhood from BookRags. (c)2022 BookRags, Inc. All rights reserved.