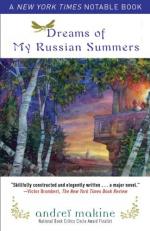 Andreï Makine
This Study Guide consists of approximately 42 pages of chapter summaries, quotes, character analysis, themes, and more - everything you need to sharpen your knowledge of Dreams of My Russian Summers.

Dreams of My Russian Summers Summary & Study Guide includes comprehensive information and analysis to help you understand the book. This study guide contains the following sections:

This detailed literature summary also contains Topics for Discussion and a Free Quiz on Dreams of My Russian Summers by Andreï Makine.

DREAMS OF MY RUSSIAN SUMMERS is the story of a young unnamed narrator, growing up in communist Russia, struggling to come to terms with his own self-identity. Throughout the novel, the narrator struggles to decide whether he is Russian or French, based on the stories of his grandmother's past in France. The novel opens with the narrator flipping through photographs of family members about whom he would like to learn more. This opens his grandmother's memory to a flood of stories starting way back from when her parents were children. Charlotte, the grandmother, experienced many of the stories she tells her grandchildren herself, and some of them were passed on from her own parents and their parents before them. No matter whose stories they are, the stories come alive through Charlotte's storytelling, and it appears as if she had been present at every major historical event in both French and Russian history. Aiding her storytelling are the various newspaper clippings Charlotte has saved throughout her life in the infamous Siberian suitcase.

During his summers with his grandmother, the narrator asks many questions and often sways back and forth between having strict Russian nationalism and strict French nationalism. When he is younger, the narrator is completely swept away with the magic of Charlotte's stories and spends all his time reading about French history, much to the damage of his Russian social life. In time, the narrator begins to question the sentimentality of Charlotte's stories, particularly after the death of both his parents. The narrator storms to Saranza, where Charlotte is living, to confront her about her brainwashing. He quickly realizes, however, that Charlotte is completely alone in Siberia and the summers when he had visited her had been perhaps the only times in her adult life that she had been able to speak French, thus preserving her culture and her personal history. The narrator decides that Charlotte's stories must be protected since they are the only fragile thread holding Charlotte to her past.

Throughout the course of the novel, both the narrator and the reader learn much about Charlotte's troubled history, hoping to solve the riddle as to why she feels so connected to Russia even though she is, by nationality, French. The reader learns that Charlotte met and married a Russian soldier named Fyodor who was arrested on New Year's Eve, suspected of being a spy. After his release, Fyodor was sent to a repatriation camp which was supposed to keep him away from home for a few days, but actually kept him away for five years. During Fyodor's absence, Charlotte received two letters declaring his death, but she refused to believe them. Instead, she patiently waited for him to return home, and he did, five years later, covered in mud, scars, and open wounds. Even though Charlotte did her best to care for Fyodor, he died from his wounds a year later. It becomes clear that even though her husband is gone, Charlotte will never leave his side. The narrator also learns that when Charlotte was young, she was raped by a group of Uzbekian soldiers in the Siberian desert. They raped her, beat her, shot her in the head, and left her for dead. But Charlotte survived. She was impregnated during the rape and went on to have her first child, a son, Sergei. Even though Fyodor knew the boy wasn't his, he raised him and loved him as his own.

The narrator struggles to come to terms with these facts, as he continues to struggle with his own self-identity. While watching a prostitute have sex with a group of soldiers through the portholes of a boat, the narrator is shocked to see the image of the prostitute through the tiny windows. Her body, and image, seems to be chopped in half since he can only see her bottom half or upper half at one time. When looking through the top window, the narrator notices how calm the prostitute's face is; she even picks at old nail polish on her fingernails. While looking through the bottom window, the narrator sees the violent ways her body is being pounded by the soldiers. In a way, he feels a deep connection to the prostitute as he struggles to reconcile how these two halves can belong to the same person; in a way, it is the same as the narrator struggles to reconcile how his two halves, his French half and his Russian half, belong to the same person.

In his adulthood, the narrator moves to France and lives there, without contact with his grandmother, for twenty years. Suddenly, he feels himself beginning to slip into madness, as if his grandmother is following him, calling out to him. He hires a private investigator to find out if Charlotte is still alive. The narrator plans to pick Charlotte up and bring her back to live with him in France so he can write her life story. He finds, however, that Charlotte has passed away and he is now all alone in the world, which has a profound impact on him even though he has not spoken to her in over twenty years. As his inheritance, Charlotte sends him a letter explaining from where he had come, hoping to settle the debate between his French and Russian heritages once and for all. In the letter, the narrator finds out that his actual birth mother was a prisoner in a Gulag camp Charlotte had been sent to monitor during the war. When the woman died, leaving behind a two-year-old child, Charlotte smuggled the baby out of the camp to be raised by her own daughter, the narrator's adoptive mother.

More summaries and resources for teaching or studying Dreams of My Russian Summers.

Dreams of My Russian Summers from BookRags. (c)2022 BookRags, Inc. All rights reserved.