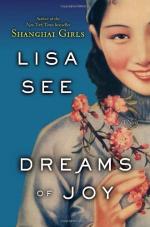 Lisa See
This Study Guide consists of approximately 50 pages of chapter summaries, quotes, character analysis, themes, and more - everything you need to sharpen your knowledge of Dreams of Joy.

Dreams of Joy: A Novel Summary & Study Guide includes comprehensive information and analysis to help you understand the book. This study guide contains the following sections:

This detailed literature summary also contains Topics for Discussion and a Free Quiz on Dreams of Joy: A Novel by Lisa See.

Written in the alternating first-person perspectives of both nineteen-year-old Joy and her adoptive mother, Pearl, Dreams of Joy describes the events that occur when Joy runs away to communist China in the 1950s in search of her birth parents and true meaning in her life. After finding out that the woman Joy believed to be her aunt was actually her birth mother and that her birth father is an artist living in communist China, Joy steals her college fund and runs away in the middle of the night to China. Joy quickly reunites with her birth father, an artist named Z.G.. However, he is being sent by the government to live with peasants in the countryside to reassess his imperialistic mind. Joy, who has studied Chinese politics in school, is anxious to travel with him, as she believes life on a commune is the most efficient way to live. When Joy and her father arrive at the Green Dragon Village, peasant life is everything Joy hoped for where everyone works so everyone eats. She is able to spend time reuniting with her birth father and even falls in love with a promising young artist, Tao. Although she misses many of the conveniences of living in the West, such as running water, shopping centers, and the ability to freely speak your mind, Joy feels as if she is truly contributing to the Chinese way of life. The work is backbreaking and at times, the food is scarce, but this punishing lifestyle keeps Joy from thinking about her heartbreak at leaving home, and the suicide of her adoptive father Sam. Sam hung himself a week before Joy ran away from home because the government was pressing him to name Joy as a communist. Rather than exposing the truth of Joy's parentage and possibly getting her into governmental trouble, he killed himself, leaving Joy overwhelmed with guilt.

Meanwhile, Joy's adoptive mother, Pearl, chases after Joy, breaking through the bamboo curtain into China. Pearl has not been back to China since she escaped from Shanghai as a teenager, after being beaten and raped by attackers. When Pearl returns to China, she is overcome initially by a multitude or memories, including her long-lost love for Z.G., Joy's biological father. When Pearl was a teenager, Z.G. painted propaganda posters for Pearl and her sister May. Both sisters fell in love with the charming artist, but only May succeeded in bedding him, resulting in her unexpected pregnancy with Joy. Neither sister ever stopped loving Z.G. and Pearl quickly learns that Z.G. has never stopped loving May. Pearl puts herself in grave danger by returning to China, particularly because she has her sister secretly send money to support her so Pearl will not lose any of the money to the untrustworthy government. Almost immediately upon entering the country, Pearl is called in for making a nuisance of herself at the Artist Association where Z.G. works and forced into thought rehabilitation. Now that her name is written into government records, Pearl knows it will be much harder for her to sneak Joy back to America, if she ever finds her. As she waits for Joy to return from the countryside, Pearl gets a job as a paper collector and moves back into her childhood home where she is reunited with an old friend Dun.

After a few months on the commune, Joy and Z.G. return to Shanghai and are reunited with Pearl. Joy is unsure how she feels about being reunited with the woman who lied to her throughout her entire life and she is desperate to get back to Tao on the commune. She returns to the countryside against her parents' wishes and marries Tao. Almost immediately after getting married, Joy realizes that life on the commune is not what she expected and that perhaps her husband does not love her as much as he lead on. She worries that he is using her as a way to escape China. Joy's fears are realized when the government orders the peasants to begin planting more crops than they can possibly grow in their allotted fields. Food is already growing scarce on the commune. The subsequent harvest is a complete loss as the seeds that were planted too close together, eventually choked each other. All across China, peasants begin to starve to death and rationing is so tight in the cities that even the wealthy begin to lose weight. People around Joy begin to die. She realizes that government has lied to the people and that there is no chance of escape. Slowly, Joy realizes that Tao is cheating on her and that he no longer loves or respects her. Despite Tao's demands that Joy beg her father for travel cards, Joy still believes in the Chinese government and refuses to leave the commune. Soon, Joy gives birth to a daughter, Samantha, named after Joy's deceased father. Tao loathes Sam, having wished for a son, and refuses to give either Joy or Sam any respect or affection. When Joy asks the commune for a divorce from Tao, she is refused. To make matters worse, the entire community within the commune turns against her for being too imperialistic despite her dedication to Red China. Joy realizes that she needs to escape immediately. Things in the commune turn desperate as people starve to death and even resort to cannibalism. Tao even tries to sell Samantha as food to another couple. With her last bit of strength, Joy manages to sneak photographs of herself and her starving daughter to her parents in Shanghai, hoping they will come for her before its too late. Pearl, Z.G. Dun, Samantha, and a rescued starving boy all manage to safely escape to Hong Kong where May is waiting for them. Although the book does not follow the characters to America, it is safe to assume that everyone made it there safely.

More summaries and resources for teaching or studying Dreams of Joy: A Novel.

Dreams of Joy: A Novel from BookRags. (c)2022 BookRags, Inc. All rights reserved.