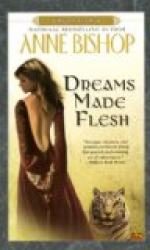 Anne Bishop
This Study Guide consists of approximately 24 pages of chapter summaries, quotes, character analysis, themes, and more - everything you need to sharpen your knowledge of Dreams Made Flesh.

This detailed literature summary also contains Topics for Discussion on Dreams Made Flesh by Anne Bishop.

"Dreams Made Flesh" is the fifth book in the Black Jewels series by Anne Bishop. The book consists of four stories, which all take place in the same world and feature the same set of characters, yet focus on different aspects of the power of the jewels. "Weaver of Dreams," the first story, recounts the transfer of the jewels' power from dragons to spiders, the state it remains in for the rest of the book. Adying dragon, the last of her kind, collapses in a cave where a spider, the Weaver of Dreams, feeds on her body and picks up her memories, as well as the secrets of the magic of the darkness.

The second story, "The Prince of Ebon Rih," tells of of Saetan's son, Lucivar, a Warlord Prince settling down to a domestic existence. Pursued by women, Lucivar decides to hire a housekeeper to fend them off. However, the housekeeper he hires, Marian, is herself a beautiful young woman traumatized by a recent rape attempt. Despite their hesitations, Lucivar and Marian fall in love with each other and eventually get married, despite the best efforts of Lucivar's mother and a conniving young witch who wants Lucivar for herself.

"Zuulaman" is a story demonstrating the full capacity of Saetan's powers - as well as his weak points. Saetan's pregnant wife, Hekatah, pretends to be held hostage in order to get Saetan's sympathy - and his money. When she sends him parts of their dead baby's body as ransom, though, he unleashes his fury and destroys all of Zuulaman.

The final story, "Kaeleer's Heart," continues another of the Black Jewels stories by telling of the aftermath of Jaenelle, the Witch, burning out her power saving Kaeleer. She has new jewel, Twilight's Dawn, instead of her old jewels. As she learns how to use it, her consort, Daemon, finally discovers that she is still in love with him and that they are finally able to be married.

More summaries and resources for teaching or studying Dreams Made Flesh.

Dreams Made Flesh from Gale. ©2005-2006 Thomson Gale, a part of the Thomson Corporation. All rights reserved.