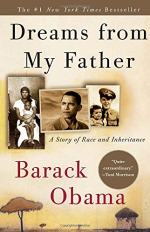 Dreams From My Father Summary & Study Guide includes comprehensive information and analysis to help you understand the book. This study guide contains the following sections:

This detailed literature summary also contains Topics for Discussion on Dreams From My Father by Barack Obama.

The following version of this book was used to create this Study Guide: Obama, Barack. Dreams from My Father: A Story of Race and Inheritance.Three Rivers Press, 2004. Revised edition.

Dreams from My Father: A Story of Race and Inheritance is a memoir by Barack Obama II, former president of the United States. Published in 1995 and revised in 2004, the book details Obama's evolving sense of his racial identity as he grows up in Hawaii with his white mother's family but without his father, Barack Obama I, a Harvard- educated economist from Kenya. Over the course of the book, Obama engages in these struggles in various settings--Hawaii, Los Angeles, New York, Chicago, and Kenya.

In "Origins," Obama opens the narrative with a description of his bewilderment at 21 after he received a call to inform him of his father's death. Obama then describes his early life in Hawaii, where he lived with his mother and grandparents after the departure of his father when Obama was just two. Obama's only knowledge of his father during these years came from stories that represented the man as larger-than-life but did nothing to explain his absence. Obama moved to Indonesia when he was six, after his mother married Indonesian geologist Lolo Soetoro. Unhappy with the political atmosphere in Indonesia, Ann sent Obama back to Hawaii to live with her parents when Obama was 10. In 1972-1973, Ann returned to Hawaii with Obama's half-sister Maya and Obama's father came to Hawaii for a month-long visit with his son.

As a high school student, Obama became deeply troubled by questions of racial identity. While his friendship with Ray, an African American from Los Angeles, and the men with whom he played basketball gave him the chance to interact socially with African Americans, the lack of a strong black male mentor and Obama's encounters with racism eventually convinced him that to be black simply meant to be the victim of racism. This depressing perspective on racial identity led Obama to experiment with alcohol and drugs, habits that pursued him when he moved to Los Angeles to attend Occidental College.

As a college student, Obama became involved with political causes on campus and had an epiphany--inspired by a confrontation with Regina, an African American friend--that he wanted to live a more intentional life that built upon but was not entirely defined by his racial identity. Obama transferred to Columbia University in New York City after his sophomore year. The narrative loops back to the moment in which Obama received the call about his father's death and his sense of loss as he realized the gap this death would leave in his life.

As a Chicago community organizer, Obama learned to navigate the class and racial politics of a city governed by its first African American mayor, Harold Washington, but one still caught up in systemic issues that led to crime and lack of economic progress in African American communities. In this setting, Obama learned more about the reality of what it would take to change the system. Under the tutelage of DCP's founder, Marty Kaufman, Obama experienced a mix of success and failures as he worked with volunteers and tenants living in Chicago's Altgeld Gardens housing project.

Obama also visited with his half-sister Alma, who told him that his father had been a neglectful parent and a struggling alcoholic who had difficulty finding work because he had alienated the Kenyan prime minister. During his final years as a community organizer in Chicago, Obama attended Trinity United Church of Christ, where he had a religious experience that helped him to see his racial identity in the context of the Christian struggle for redemption and hope. Obama applied to and was accepted at Harvard Law School.

In "Kenya," the last section of the memoir, Obama recounts his three-week visit to Europe and a two-week stay in Kenya, where he had the chance to visit his family in 1988, just before he began law school. Obama learned about the troubled relationships between fathers and son that began with Hussein Onyango Obama's estrangement from his son, Obama's father. Obama also witnessed the ongoing impact of his father's poor choices on the Obama children and extended family. Despite the difficult stories he heard, Obama came to understand the many connections between his family's history and his own identity. The memoir closes with an epilogue in which Obama describes his marriage to Michelle Robinson, the lives of family members since 1988, and his career as a lawyer who works with nonprofits.

Dreams From My Father from BookRags. (c)2022 BookRags, Inc. All rights reserved.