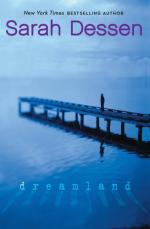 Sarah Dessen
This Study Guide consists of approximately 31 pages of chapter summaries, quotes, character analysis, themes, and more - everything you need to sharpen your knowledge of Dreamland.

This detailed literature summary also contains Topics for Discussion and a Free Quiz on Dreamland by Sarah Dessen.

Caitlin O'Koren wakes on the morning of her sixteenth birthday to find that her eighteen-year-old sister, Cassandra, has run away from home just before she was due to go to Yale. Caitlin's parents are immediately caught up in their search for Cass and Caitlin's birthday—including the trip to get her driver's license—is put aside. Caitlin drifts into joining the cheer squad though she has no real desire to do so, then is drawn to a young man who represents the total opposite of what Cass had done in her life. Rogerson Biscoe is wild and sells drugs. He has been in trouble with the law but Caitlin initially believes that Rogerson has turned his life around. He invites her out and takes her along as he sells drugs. They return to his house where Caitlin witnesses Rogerson's father hit him for being late. The incident forms an instant bond between the two because Caitlin is the only person who knows Rogerson's secret.

Over the coming months, they are together a great deal and Caitlin's school work, friendship with her pal Rina and cheer performance suffer for the amount of time she spends with Rogerson. She also begins smoking a great deal of marijuana and becomes friends with a young woman who supports that habit. Rogerson strikes Caitlin several times and their relationship escalates sexually. As the sex, drugs and abuse become more prevalent, Caitlin struggles to keep it all a secret from her parents and friends. Her parents reconnect with Cass but Caitlin, fearing her sister will know her secret just from her voice, avoids talking to Cass on the phone. Caitlin knows that she could tell anyone this horrible secret, but does not because she believes it means she is weak. She continues to see Rogerson despite the abuse and wonders each time he lashes out at her if his father has lashed out at him.

Finally, Rina convinces Caitlin to take an afternoon trip with her. Caitlin is fearful because she knows Rogerson will probably come by and he will be angry if she is not waiting for him. Rina and Caitlin's mother insist and she finally gives in. When she returns, later than she had planned, Rogerson is waiting and begins a brutal beating that is interrupted when a friend sees the fight. Caitlin is sent to rehab and it takes time for her to come to some conclusions about her life. She learns that Cass, despite Caitlin's impressions, is not perfect; that being Rogerson's victim does not mean Caitlin is weak; and that she can be herself.

More summaries and resources for teaching or studying Dreamland.