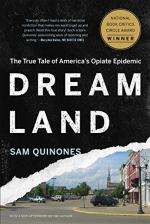 Sam Quinones
This Study Guide consists of approximately 59 pages of chapter summaries, quotes, character analysis, themes, and more - everything you need to sharpen your knowledge of Dreamland.

The following version of this book was used to complete this guide: Quinones, Sam. Dreamland: The True Tale of America's Opiate Epidemic. Bloomsbury Press, 2016.

Working as a crime reporter with a focus on Mexican drug trafficking, Sam Quinones found himself at the nexus of Ohio's Rust Belt and Appalachian Kentucky, investigating how heroin from a small village from a small state in Mexico found its way to the eastern United States in alarming numbers. "I grew consumed by this story," he admits the book's introduction, "it was a story about America and Mexico, about addiction and marketing, about wealth and poverty, about happiness and how to achieve it" (8). The story, which he retells in the pages of Dreamland, follows the progression of opiate abuse and dependence throughout history with a hyper-critical lens on the years leading up the current opiate epidemic. Combining his investigative and storytelling prowess, Quinones paints a dynamic and moving picture of the opiate epidemic from every possible perspective, from dealers and addicts, to doctors and clinicians, to football players and wrestlers. With a swiftly-moving structure, dramatic flair, and a genuinely insatiable appetite for his subject matter, Quinones manages to maintain several fluent narratives within his rapid pace; the product is an equally captivating and informative investigation into one of the largest social issues of the modern United States - opiate addiction.

Quinones begins by investigating the roots of pain and pain management, a history plagued at every turn by the morphine molecule. Though the "Holy Grail" of modern medicine, a non-addictive opiate painkiller, continues to elude researchers, pain remains a far-reaching and serious problem (76). Combined with Americans' proclivity for fast and convenient fixes, those suffering from pain and the doctors ethically bound to treat them initiated what Quinones calls the pain revolution, a hugely successful campaign to destigmatize the use of opiates for a wide array of pain patients. On this newly destigmatized turf, pharmaceutical behemoth Purdue introduced OxyContin with a direct and aggressive marketing campaign driven by profit as opposed to pain management. Alongside his story of the pain revolution and the spread of OxyContin use and abuse, Quinones weaves in the narrative of the book's primary cast of characters: a vast but loosely connected network of Mexican heroin traffickers called the Xalisco Boys. The Boys' efficiency, scope, their humble roots from the same small state of sugarcane farmers, and their reluctance to engage in territorial violence and drug use like most trafficking networks intrigued Quinones and law enforcement alike. Within the pages of Dreamland, Quinones details these two powerful waves of opiate abuse, one stemming from prescription pads and the other from Mexican black tar heroin, and their convergence to create the opiate epidemic.

In studying the convergence of these two waves, Quinones found himself at the same frustrating and confusing crossroads as the parents of overdose victims: how can someone grow addicted to doctor-prescribed drugs? Why did black tar heroin ravage middle class suburbia? Why wasn't rehab enough? By the end of his investigation, he realized that "the history of heroin was best told by addicts," as their relatable stories of human suffering and failed attempts at redemption re-painted them as humans affected by a disease rather than desolate junkies (71). In this light, Quinones works to humanize addicts by offering their stories in their own words as well as the stories of family members who have lost a loved one to addiction. Support groups and activist organizations run by parents of young overdose victims offer a beacon of hope that a "drug scourge so ably abetted by silence" may be defeated by speaking out (289). While most of his text is dedicated to the investigation of the roots and progression of the opiate epidemic, Quinones naturally finds himself searching for the same answers as those in the throes of the epidemic. Instead of wallowing in these difficult questions, however, Quinones looks to the future to find hope; "perhaps heroin is the most important force for positive change in our country today," because, as he believes "more strongly than ever," "the antidote to heroin is community" (253).

More summaries and resources for teaching or studying Dreamland: The True Tale of America's Opiate Epidemic.