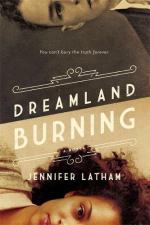 Rowan Chase is a 17-year-old girl living in Tulsa, Oklahoma, in modern times. Her mother is a black attorney, and her father is a white oil tycoon. Rowan's summer vacation is just beginning on the day a construction crew finds a skeleton under the floor of the guest house on the family's property. It has been there for roughly a century. Rowan is immediately intrigued by the mystery. With the help of her best friend, James, Rowan moves the skeleton enough to find a gun and a wallet containing a receipt for the purchase of a Victrola record player. Rowan turns the wallet and gun over to the authorities, but she keeps the receipt as she and James set out to identify the body and find out if the person was murdered.

William Tillman is a 17-year-old boy growing up in Tulsa during the 1920s. He is the son of a white father who sells Victrola record players and an Osage Indian mother who is wealthy because of her share of the Indian tribe's oil production. William's father, Stanley, seems to be an upstanding, honorable man. His mother, Kathryn, is a strong woman who has been forced to turn over control of her fortune to her white husband. One evening, William gets into an argument with Clarence, a black man who is sitting with a white girl at a local speakeasy. The argument ends with police involvement. Clarence dies from the police beating. William begins to more closely examine the way blacks are treated. Stanley has always been willing to secretly sell his products to blacks, despite laws that forbid whites from serving blacks. However, Stanley refuses to issue credit to blacks as he does whites. William sees that as a prejudicial attitude, and he does not believe it is right.

William encounters Joseph Goodhope outside the store. Joseph talks Stanley into a lay-away plan for a record player. Joseph faithfully makes his payments, though Stanley refuses to even provide him with a receipt for the transactions. When racial tensions flare and the city falls into chaos. William finds himself searching the black neighborhood of Greenwood for Joseph and his younger sister, Ruby. He eventually finds them and hides them in the house his family is constructing. It is the house where Rowan lives a century later. That evening, a man named Vernon Fish finds Joseph and Ruby, but William intervenes. During the resulting fight, Vernon is struck on the head with a brick. He is buried under the floor.

A century later, Rowan is trying to solve the mystery of the dead man on her property while she is beginning a summer job at a medical clinic in a poorer part of Tulsa. She becomes acquainted with a homeless black man named Arvin. When Rowan is involved in an accident and Arvin comes rushing to her aid, a white man shoves Arvin into oncoming traffic. Arvin dies. Rowan is horrified, but more so when the man avoids charges. Rowan plans to testify against him in the search for justice for Arvin.

In the days after the accident, Rowan and James continue to do research, and they learn about William and his family's shop. They find information that leads them to William's son, who is dying of cancer in a nursing home and then to Ruby's daughter, who lets Rowan listen to a series of recordings. In his own voice, William tells the story of how Vernon Fish died. Rowan learns that the dead man on their property was not an innocent victim, but a cruel man who had indiscriminately killed blacks during the riot that burned Greenwood to the ground.