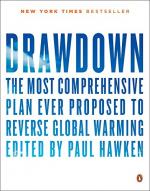 Paul Hawken
This Study Guide consists of approximately 35 pages of chapter summaries, quotes, character analysis, themes, and more - everything you need to sharpen your knowledge of Drawdown.

Drawdown: The Most Comprehensive Plan Ever Proposed to Reverse Global Warming Summary & Study Guide includes comprehensive information and analysis to help you understand the book. This study guide contains the following sections:

This detailed literature summary also contains Topics for Discussion on Drawdown: The Most Comprehensive Plan Ever Proposed to Reverse Global Warming by Paul Hawken.

The following version of this book was used to create the guide: Hawken, Paul, editor. Drawdown: The Most Comprehensive Plan Ever Proposed to Reverse Global Warming. Penguin Books, 2017.

Drawdown is a collection of 100 possible solutions to reduce carbon emissions in the planet’s atmosphere over the next three decades. Its goal is to provide readers with a summary of each solution, how that solution reduces carbon dioxide, CO2, emissions, the amount of reduction in emissions possible, what the estimated cost in implementing the plan would be, and the net savings (listed in United States dollars). Based on these statistics, Drawdown ranks each possible solution on how much effect it will have on curbing carbon emissions.

“Energy” focuses on meeting the global demand for power yet creating the power needed from renewable sources. The dependence on fossil fuels has hastened the climate crisis by raising the CO2 greenhouse gases in the earth’s atmosphere. Any scientifically reasonable energy plan moving forward will not only reduce the use of fossil fuels but eliminate them. Energy sources like solar, as in solar panels or wind, such as in turbines, are shown to be competitive with gas and oil when the government subsidies given to the fossil fuel companies are removed. Other lesser-known energy sources, like geothermal, wave and tidal energy, and machines that collect the methane from organic waste decomposition all have the ability to create renewable energy. Combined, they could meet the global energy need. In addition, ensuring that the current electrical grids are flexible enough to handle energy from different sources is critical.

The “Food” section highlights solutions that require personal choices, such as shifting to a plant-rich diet, and collective efforts, such as reducing food waste at the industrial and personal levels. New and re-found agricultural methods that sequester carbon in the soil will reduce the dependency on fertilizers, and insecticides. Increased carbon in the soil means healthier soils, increased fertility and water retention, and nutrient-rich plants.

The section on “Women and Girls” outlines how education and access to family planning will significantly reduce population while allowing female farmers the same access to supplies and education to increase crop yields. Long thought of as energy drainers, “Buildings and Cities” are creating innovative ways to retrofit old buildings and create new, sustainable buildings that not only uses less energy but also can produce energy of their own. In “Land Use” many of the solutions are protecting forests, coastal wetlands and peat lands from further destruction. Each encroachment not only clear-cuts carbon-sequestering tress and exposes soils, but reduces the biodiversity of the earth.

In “Transport,” Drawdown focuses on the some of the largest emitters of greenhouse gases—automobiles, trucks, trains, and planes. Here, the solutions focus on creating dependable mass transit systems that rely on renewable energy, electric vehicles, and the redesigning of trucks and airplanes to reduce fuel costs. The “Materials” used in industrialized nations often ends up in a landfill or incinerator. More knowledgeable consumers as well as industry owning a product from creation through disposal are possible solutions to an ever-increasing belief that items can be simply thrown away. Refrigeration, ranked as number 1 in Drawdown, requires redesigning to remove hydrofluorocarbons that increase the greenhouse effect. Straightforward water and recycling solutions are offered.

In “Coming Attractions,” Paul Hawken lists 20 solutions in the experimental process that have possibilities of revolutionizing how energy is created, such as hydrogen-boron fusion, or to stopping the permafrost from melting, such as repopulating the mammoth steppe. New and engaging renewable ideas such as solar-paneled roads, or creating artificial photosynthesis are summarized.

More summaries and resources for teaching or studying Drawdown: The Most Comprehensive Plan Ever Proposed to Reverse Global Warming.

Drawdown: The Most Comprehensive Plan Ever Proposed to Reverse Global Warming from BookRags. (c)2022 BookRags, Inc. All rights reserved.