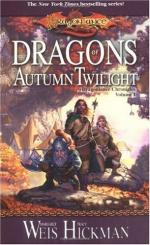 This detailed literature summary also contains Topics for Discussion and a Free Quiz on Dragons of Autumn Twilight by Margaret Weis.

Dragons of Autumn Twilight by Margaret Weis is the story of a set of companions that meet for the first time in five years after going their own way. They are quickly drawn into a war that they didn't even knew existed. They struggle to find the truth of the long forgotten gods and the way to free their land of the dragons that threaten to destroy them all.

Tanis, a half-elf, is the unofficial leader of a band of friends that meet up after five years of searching for answers about the once true gods. The companions meet in a town called Solace that used to be their home. When they reunite they find that there are two tribal people, Riverwind and Goldmoon, that have a magical blue staff capable of great healing. Through an odd series of events, the companions are suddenly associated with the tribal people and all of them must run for their lives. They decide to travel to Haven to see if someone knows something about the staff but are attacked by strange lizard like creatures and forced into a haunted forest called Darken Woods. While in Darken Woods, they are guided by ghosts to the Forestmaster, a unicorn. The Forestmaster tells the group that they must travel to the ancient city of Xak Tsaroth to find something there that will help them in the battle that is coming.

The companions reach Xak Tsaroth only to find that the items that they are looking for, holy disks, are being guarded by a dragon. The companions are able to get the disks and kill the dragon, but when they head away from Xak Tsaroth they see that the dragons and the creatures that serve them, draconians, all of these serving the Queen of Darkness, have started attacking. Much of Krynn, including Solace, has been burned. The companions are taken captive and sent on their way to the slave mines but are rescued by elves before they get there.

Too late in the plan Tanis realizes a member of his group has betrayed them, but they must go through with the plan. Tanis and several members of his group face off with Verminaard and kill him as his dragon is killed by a old dragon who had gone crazy. The Queen of Darkness's cleric was defeated, but it is noted that the Queen herself has not left the world and there will be more dragons and the dragon lance must be found.