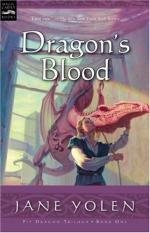 Jane Yolen
This Study Guide consists of approximately 40 pages of chapter summaries, quotes, character analysis, themes, and more - everything you need to sharpen your knowledge of Dragon's Blood.

This detailed literature summary also contains Topics for Discussion and a Free Quiz on Dragon's Blood: The Pit Dragon Chronicles, Volume One by Jane Yolen.

Dragon's Blood, the opening book of the Pit Dragon Trilogy by Jane Yolen, is the story of a young bonder named Jakkin Stewart, who has a dream of becoming a dragon trainer. It is a story of love, slavery, compassion, fierce loyalty, and a young man's drive to be free.

Jakkin Stewart was born free, but after the death of his father, his mother sold them both into bondage for survival. After she too died, Jakkin was left on his own at Sarkkhan's nursery, where he helps care for the Master's dragons. Jakkin, however, is good with the creatures, and dreams of stealing an egg to hatch, so he can train his own dragon to fight in the pits, thereby earning his way out of bondage. After cultivating a piece of ground far into the harsh landscape around the nursery, Jakkin plans his theft, only the have the local man in charge of the bonders, drug addict Likkarn, spoil his plan by hurting him while taking down a wayward dragon. After a week in the hospital, Jakkin returns to the nursery, only to find the eggs already hatched. On finding a miscount of hatchlings, however, Jakkin steals a baby dragon and takes it to his shelter. Training by night and working by day, Jakkin builds a close bond with the dragon, who turns out to be a fierce, blood red fighter. Jakkin fears for their safety from Drakks, or local birds who kill dragon hatchlings, but with help from other bonders and his new friend, Akki, he helps the dragon grow and learn. As he and Akki grow closer, he finds his feelings for her mingled with question about her unmentioned past. Akki, who was born free, can also read, and together she and Jakkin learn about fighting dragons and raising them to fight more productively.

A year later, Akki arranges for Jakkin's first fight with his dragon at a nearby minor pit. When he arrives, however, he finds that Sarkkhan, his master, is fighting that day, as well. After a nearly perfect beginning fight, Jakkin is found directing his dragon telepathically from the pits by Likkarn. His dragon nearly loses when Jakkin loses his concentration, but he pulls himself together in time, allowing his dragon to win the match, although Jakkin is shocked to learn the animal is mute. All seems well, but Lakkarn warns that the dragon is about to kill his opponent, which would render him unusable in a fighting arena. Jakkin pulls the dragon back just in time. Back in the stable however, Jakkin is furious when Lakkarn pushes him aside in a weed haze, intending to care for its wounds. Jakkin protests, but is stopped by none other than Sarkkhan, his master. Sarkkhan reveals he has been watching Jakkin raise and train the dragon, and that he intentionally bred the dragon a mute, so he would not give anything away in a fight through roars. Sarkkhan also reveals he has had Lakkarn watching Jakkin, and that he bet money on Jakkin to win. Jakkin also learns Sarkkhan, too, stole dragons to earn his way out of bondage, that it was Lakkarn who taught him to be a trainer and a breeder, and that Akki is, in fact, Sarkkhan's daughter. Jakkin and Sarkkhan agree on terms of his bondage release, and Sarkkhan is promised his choice of the dragon's second litter, as Jakkin learns for the first time that his dragon is a female. Back at the nursery, Jakkin still works to pay for food and housing for his dragon, but he is free. Akki, however, decides to leave, as she hates her father, and refuses to take his care or his money. Jakkin stays, hoping he can one day earn enough to win the heart of Akki and have her take him as her man.