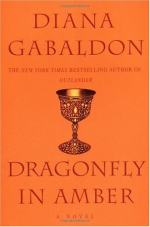 Diana Gabaldon
This Study Guide consists of approximately 66 pages of chapter summaries, quotes, character analysis, themes, and more - everything you need to sharpen your knowledge of Dragonfly in Amber.

This detailed literature summary also contains Topics for Discussion and a Free Quiz on Dragonfly in Amber by Diana Gabaldon.

It is the year 1968. Claire Randall Fraser has a twenty-year-old daughter fathered by Jamie Fraser of Clan Fraser of the Highlands of Scotland. He is from the year 1745. The explanation of their daughter's birth, through a strange mechanism of time travel, is what the story is fundamentally all about. At the beginning of the story, Claire and her daughter Brianna visit an old friend named Roger at his late uncle's home. Claire desires to look into an old battle fought in Scotland where the Fraser family had passed away.

Twenty years before Brianna's birth Claire leans against one of the standing stones and is transported back in time to the brutal and raw Highlands of Scotland. First, Claire is attacked by Jonathan Randall, who is actually Frank's ancestor. He is a rude captain and tries to force himself upon her. Jamie Fraser enters the picture as the one who rescues her from Jonathan Randall. In his accompaniment are his uncles Colum and Dougal, who take Claire in cautiously.

Claire marries Jamie and slowly they come to look out for one another, then fall madly in love with each other. As they become closer, Claire finds it necessary to tell Jamie the truth of her past. He listens, but finds himself torn because he is in love with her. He takes her to the standing stones and orders her back to her own time. Claire fights a battle of wills within herself, as it's been months since her leave from her own time, and she has built a loyalty to Jamie. She is not sure what to do, but chooses to stay with Jamie. After the choice is made, the two are inseparable. They vow to be together no matter what happens to them.

The story continues as Claire uses her knowledge of the past and tells Jamie that there will be a battle called the Battle of '45 and the Scots will be crushed on Culloden field. They make it their mission to stop the battle. Claire knows that in 1744 Charles is beginning his search for support in France. She knows that in 1745 in Culloden Prince Charles would be defeated.

Jamie goes to dinner party after dinner party with dukes and lords of the English, Irish, and Scottish. He makes it his mission to find out how the war actually started and put a stop to it. Claire is pregnant, so it's a hard journey for her. As they travel by horseback through the nights and days, sleeping in the open, Claire loses the baby. After five months of pregnancy she bleeds heavily and the child is lost. The nurse at the hospital calls her Faith Fraser.

Jamie and Claire grow apart for a time, but their love is strong and they are together again, continuing their pursuit to stop the battle at Culloden. There is honor and loyalty to the dukes, kinds, and lords of the lands, and the men take it very seriously. No matter what is to happen, the men will fight for the men to whom they have sworn an oath.

In the end, Claire is pregnant again and Jamie fears for their lives. He brings her back to the standing stones and tells her that she must return to the future for the sake of their unborn child. She is hesitant, but goes for Jamie. As it turns out, he saved her life and Brianna's, for it was a difficult pregnancy and she needed the medicine of her time in 1968.

More summaries and resources for teaching or studying Dragonfly in Amber.