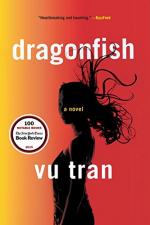 Vu Tran
This Study Guide consists of approximately 39 pages of chapter summaries, quotes, character analysis, themes, and more - everything you need to sharpen your knowledge of Dragonfish.

This detailed literature summary also contains Quotes and a Free Quiz on Dragonfish: A Novel by Vu Tran.

The following version of this book was used to create this study guide: Tran, Vu. Dragonfish. W. W. Norton and Company, 2015.

Dragonfish opens with a brief letter written by a Vietnamese immigrant named Hong Thi Pham, also known as Suzy. It is addressed to her daughter Mai, and it says that Suzy will attempt to explain the decisions she has made over the years. The main narrative then begins, narrated by Robert, who is an Oakland police officer and Suzy's ex-husband. Robert is ambushed in his apartment by two Vietnamese men who work for a Las Vegas criminal named Sonny Van Nguyen. Five months earlier, Robert had gone to Las Vegas because he found out that Suzy, already divorced from Robert, had entered a romantic relationship with Sonny, and that Sonny was physically abusing Suzy. In Las Vegas, Robert met Sonny's son, Jonathan Van Nguyen, who prevented Robert from seeing Suzy and told Robert to go home.

The two men who have broken into Robert's apartment take Robert to Las Vegas where they all meet with Jonathan. Jonathan says that Suzy has disappeared, and he wants Robert to help him find her. They tell Robert to look in the Coronado casino and hotel, from which Sonny and Jonathan are banned. There, Robert does some investigation and finds the room in which Suzy apparently liked to stay when she visited the Coronado in the past. Inside, he finds a woman who looks very much like Suzy but is much younger. The narrative then switches to another letter from Suzy to Mai, which explains that they had to flee Vietnam to escape the communist regime, leaving behind Suzy's husband, who was dying of an unnamed terminal illness. In a Malaysian refugee camp on their way to America, Suzy and Mai met Sonny and Jonathan, who had also fled from Vietnam.

The narrative then transitions back to Robert's storyline. He introduces himself to the woman, and she introduces herself as Mai, Suzy's daughter. Mai was only about five years old when she and Suzy emigrated from Vietnam, but she is now in her mid-twenties. Mai says she received a letter from Suzy, her long-estranged mother, telling her to come to the room. In the room, they find a suitcase containing $100,000, apparently stolen by Suzy from Sonny in order to give to Mai.

Robert receives a call from Victor, one of the men who broke in to Robert's apartment. Victor says to meet him at a nearby bar. There, Victor tells them that he has been secretly helping Suzy to escape from Sonny and Las Vegas, and he wishes to help Mai escape with the money. He relates details of Sonny's abuse of Suzy, and he tells Robert and Mai to return to the Coronado and retrieve the money. Robert and Mai decide to comply.

The narrative then transitions to another one of Suzy's letters. Suzy explains how they came to Los Angeles to live with relatives, but they soon moved in with Sonny, who was also living in Los Angeles. When Sonny eventually asked Suzy to marry him, Suzy said she first wanted to live on her own for a year. She then abandoned Sonny and Mai and did not see either of them for twenty years. The narrative then returns to Robert and Mai, who retrieve the money from the Coronado and go to Mai's apartment to gather Mai's belongings. There, Suzy's old friend Happy, who is also a Vietnamese immigrant, arrives. Happy says she followed them there, and she admits to having had an affair with Sonny behind Suzy's back.

After Robert sends Mai out of Las Vegas, he tries to get in touch with Happy again. He goes to her house to find Sonny there. Happy's body is in the bathtub, as Sonny has killed her. Robert and Sonny fight, causing one of the logs to be knocked from the fire, sending the house up in flames. Robert falls unconscious but regains slight consciousness as he is carried out of the house. He awakes in a room with Jonathan Nguyen, who explains that he chose to save Robert from the fire but not Sonny, as Sonny was becoming too much of a liability. Jonathan tells Robert to leave Las Vegas and never return, and Robert complies.

More summaries and resources for teaching or studying Dragonfish: A Novel.