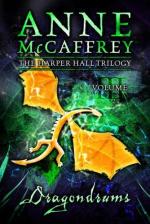 Anne McCaffrey
This Study Guide consists of approximately 30 pages of chapter summaries, quotes, character analysis, themes, and more - everything you need to sharpen your knowledge of Dragondrums.

This detailed literature summary also contains Topics for Discussion and a Free Quiz on Dragondrums by Anne McCaffrey.

Dragondrums by Anne McCaffrey is the story of the young harper apprentice, Piemur. Piemur is first introduced as the finest singer in the Harper Hall hold. His perfectly-pitched soprano voice allows him to take the lead in most musicals, even taking on female leads. But the fourteen-year old is suddenly stripped of his singing assignments. At rehearsal for the upcoming musical, Piemur opens his mouth to sing but only low creaky tones emerge; cruelly, his voice has changed and his singing career has ended. He is very upset as he was more than happy with his singing assignment.

Piemur is sent to discuss his future with the Masterharper Robinton who is the leader of the Planet Pern. Master Robinton recognizes Piemur's intelligence and abilities and taps him for two roles. The first is to be a drummer apprentice. The drummers are the communication link between the various Pern locales. They learn to beat out messages on the drums and interpret the messages received from other outlying holds on Pern. His second role is as apprentice to Master Robinton himself. The latter role is one that is to be kept under wraps. Master Robinton cautions the brazen Piemur not to talk about the assignments he receives from him. He is to use discretion and not boast to others. Menolly is a friend of Piemur's and is a little older than he and is a journeyman and close ally of Master Robinton. She had recommended Piemur for his assignment with Master Robinton. Menolly has charge of nine flying fire lizards. The fire lizards are pampered pets that are fed and cared for by their masters. In turn, the lizards are able to find out important things and relate them via mental imaging to their masters. Piemur looks forward to the day he can have a lizard.

Piemur proves his abilities and resilience in several assignments. He is sent to the Mining Hold to pick up some large, brilliant sapphires for Master Robinton. While there, several crusty Oldtimers from the Southern Continent arrive on their dragons looking for sapphires. Piemur is able to disguise his identity and hide the jewels from the Oldtimers. He learns they may be involved with some illegal trade with another Hold in Pern. Piemur takes this important information back to Master Robinton who is very pleased with Piemur's actions. Along the way, he has his first experiences in riding the large flying dragons of Pern. Although terrified at first when he slips into the cold "between" state, he is able to endure the ride. Piemur travels with Menolly and Sebell and witnesses an Impress where baby dragons are hatched and stumble around the masses until they select their owners.

Piemur quickly becomes the best drummer among the apprentices. The other apprentices resent his abilities and his frequent absences. Unbeknown to the others, his absences are due to the assignments he receives from Master Robinton. But maintaining his vow not to boast, he tells no one about these activities. The apprentices play pranks on him, one of which causes Piemur severe injury. Robinton orders that Piemur be permanently removed from his drummer apprenticeship.

After he recovers, Piemur is sent with Sebell, a harper journeyman, to Nabol Hold. He is to infiltrate among the Nabolese to find out about their illegal trade dealings with the Southern Continent. He poses as a drudge and gains access to the evil Master Meron's quarters where he finds a large number of incubating fire lizard eggs. He steals the queen lizard's egg and through a series of incidents winds up alone with the egg in the remote Southern Continent. The egg hatches and he names his fire lizard Farli. He feeds the new lizard and protects him from the dreaded Threadfall—a deadly alien fall of razorlike rain that occurs without warning.

Robinton is concerned about Piemur and deduces that he must be in the south. He dispatches Menolly and Sebell to sail south and find Piemur. They are ordered to not return without him. However, when they find Piemur, he is so happy in the South that he gets permission from Master Robinton to stay there. The Master names him the South's first drummer-journeyman.

More summaries and resources for teaching or studying Dragondrums.