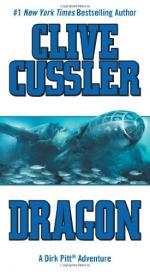 Clive Cussler
This Study Guide consists of approximately 61 pages of chapter summaries, quotes, character analysis, themes, and more - everything you need to sharpen your knowledge of Dragon.

This detailed literature summary also contains Topics for Discussion and a Free Quiz on Dragon by Clive Cussler.

The book, Dragon, by Clive Cussler, published in 1990 introduces the reader to the world of Dirk Pitt and his great friend, Al Giordino. A prologue set in 1945 tells the story of an ill-fated B-29, Dennings' Demons, on a run to bomb Japan, which does not make it because it is shot down off the coast of Japan. The plane and its cargo sink to the bottom of the sea, silently waiting for their turn in history. The story opens with a veritable bang as a Norwegian cruise-liner comes across a foundered Japanese cargo shop, the Divine Star that is mysteriously abandoned. The Norwegian crew sends a scouting group over to the Japanese ship with the intent of taking over the ship and salvaging the cargo that could be worth a great deal of money to the men who bring her into port. What they find is a completely abandoned ship, with the exception of a single body of a Japanese crewman, who appears to have been burned from the inside out. His clothes show no evidence of disaster or foul play. Within minutes of boarding the Divine Star, the Norwegian crewmen begin to exhibit symptoms of extreme illness, to the point that they begin to die. Steen, the head of the scouting crew is down in the cargo hold when he succumbs to the illness. In his rage at dying of something unknown, he takes out a handgun and shoots at the engine of the car beside which one of his men has already died.

The resulting explosion demolishes the Divine Star and the shock wave turns the Norwegian cruise liner into a heap of twisted metal before it sinks to the bottom of the sea. Twelve kilometers away, a British survey ship is likewise twisted and crumpled, stranding three team members, who are in a deep sea underwater vehicle. Communications are cut off and they are stranded at the bottom of the ocean. To the rescue come Dirk Pitt and Al Giordino, who have been living at the bottom of the Pacific Ocean for the past four months in an underwater research facility called Soggy Acres. They hear the distress signals and render aid to the three stranded researchers. This marks the beginning of the entire saga.

A Japanese businessman by the name of Hideki Suma is a megalomaniac with intentions of turning the United States into a Japanese territory. He has been importing nuclear bombs into the United States in the motors of a few Murmoto automobiles for strategic placement throughout America. He has also placed some bombs in Russia, Europe, and various Pacific locations as well. He has created a secret laboratory on an island off the coast of Japan that is a state-of-the-art nuclear facility run almost completely by robots. Once every bomb is in position, he will have the capacity to remotely detonate the bombs simultaneously, creating an electromagnetic shield that will shut down all computer and communications and render the world absolutely helpless. All computer records will be erased, and the twentieth century way of life will become obsolete, allowing Japan to take over the world.

It is up to Dirk Pitt and Al Giordino to help a group of U.S. intelligence agents stop Suma and his cohorts. Pitt suffers tremendously by having to find a way out of Soggy Acres in his DSMV, Big John, and swim from a depth of 138 feet below the surface of the water to be rescued. Immediately upon landing in Hawaii, he and Al are swept into a Gulfstream and jetted to Washington, where they are essentially given no choice but to join MAIT - Multi-Agency Investigative Team - to stop the threat to the world. Working without much rest, Pitt joins the team, but on his own terms. Pitt's girlfriend, Congresswoman Loren Smith is abducted by the Japanese and secretly taken to Ajima Island, where Suma has his command center. Flying into Suma's fortress in two ultralight Ibises, Pitt and Giordino take on Suma and his maniacal bodyguard, Kamatori. While they are successful in killing Kamatori and abducting Suma, they do not successfully incapacitate the Kaiten Project. Pitt, once again, must go underwater, manually detonate the nuclear warhead that has been sleeping below the surface of the water for fifty years, escape before the blast and stop the world threat. Only Dirk Pitt can possibly accomplish such an impossible feat.

More summaries and resources for teaching or studying Dragon.