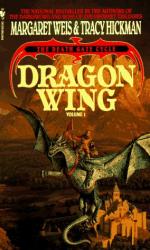 Margaret Weis
This Study Guide consists of approximately 50 pages of chapter summaries, quotes, character analysis, themes, and more - everything you need to sharpen your knowledge of Dragon Wing.

Dragon Wing is the story of how Bane, a changeling boy finally meets his real father and finds that his father is not the wonderful person he always imagined. It is the story of how Hugh the Hand finds redemption from his life as an assassin and how the walls of Haplo's heart start to have a few chinks. The other story line, about Limbeck trying to free his people from a thousand years of subjugation by the elves, is also entangled in Haplo's and Bane's quests.

The novel begins with the Lord of the Nexus instructing Haplo to go to Arianus and spy on the people there, especially the Sartans who had imprisoned the Patryns. Haplo is to spread chaos and violence so that the world will be in enough disarray that when the Lord of Nexus comes he can easily conquer the world under his rule.

Hugh the Hand, an assassin, is hired by King Stephen to kill his changeling son who was left in the crib in place of Stephen's real son. Bane, the son has an amulet which enchants everyone who looks at Bane to adore him, but not necessarily love him. Hugh is considered a hard enough man that he will not fall under the sway of the enchantment. Hugh takes Bane under the guise of protecting him from assassins to set up his murder and blame it on the elves. Alfred, Bane's chamberlain, follows the two and catches up to them. Alfred is a Sartan and feels there is something good in the boy which makes Bane worth trying to redeem.

In the lower realm, Limbeck Bolttightener is condemned to walk the steps of Terrel, which means being slung off the continent with wings strapped to his back. This is due to his crime of blasphemy - his assertion that the Elves are not gods but mortal beings. He came to this conclusion when he found a wrecked watership with dead elves inside.

Jarred, Limbeck's girlfriend, has arranged for Limbeck to be rescued. When Limbeck is pulled back up to Drevlin, the continent, he brings with him a being who looks like one of the Gegs' gods and a dog. The being is actually Haplo whose ship wrecked when he came through the death gate.

Haplo encourages Limbeck's rebellion. Meanwhile, the ship carrying Hugh, Bane and Alfred also crashes on Drevlin. Eventually, Hugh and his group work with Haplo and Limbeck to take an elf watership and go to the higher realm to deliver Bane to his father.

In the higher realm, Bane's father, Sinistrad takes the group to his palace and pumps Bane, Limbeck and Haplo for information. Sinistrad is cold and cruel and eventually Bane turns against him.

Bane attempts to kill his father. When his mother, Iridal, tries to save him, Hugh steps in and kills Sinistrad, but not before Sinistrad delivers a bite with poison and Hugh dies. Iridal and Alfred calm the quicksilver dragon that Sinistrad had enthralled. When they go to get Bane, they find him gone. Haplo had kidnapped Bane to take to the Lord of Nexus to be made into a disciple. Iridal and Alfred leave the higher realm to begin the search for Bane.

More summaries and resources for teaching or studying Dragon Wing.