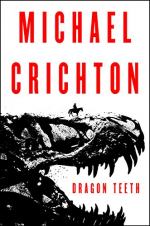 New Haven is a city in the Connecticut. William Johnson is a student at Yale College, which is located in New Haven. At Yale, Johnson meets with Professor Marsh and secures a place on March’s paleontological expedition. After his adventures in the American West, Johnson returns to New Haven to continue his studies.

Deadwood is a town in South Dakota. It was first settled in the 1870s when South Dakota was a territory and not yet a state. The settlement of Deadwood was motivated by...