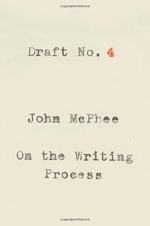 Draft No. 4: On the Writing Process Summary & Study Guide

John McPhee
This Study Guide consists of approximately 46 pages of chapter summaries, quotes, character analysis, themes, and more - everything you need to sharpen your knowledge of Draft No. 4.

Draft No. 4: On the Writing Process Summary & Study Guide Description

Draft No. 4: On the Writing Process Summary & Study Guide includes comprehensive information and analysis to help you understand the book. This study guide contains the following sections:

This detailed literature summary also contains Topics for Discussion on Draft No. 4: On the Writing Process by John McPhee.

The following version of this book was used to create this study guide: McPhee, John. Draft No. 4. Farrar, Straus and Giroux, 2017. First Edition.

The opening essay “Progression” discusses the aspects of John McPhee’s writing process which began with him writing magazine profiles of individuals. His desire to break out of his usual form resulted in a double profile and, subsequently, a quadruple profile which evolved into a book. This progression in his career opens up a discussion on subject, structure, and process in which McPhee encourages readers to follow their interests and assures them that ideas are everywhere. To demonstrate this, and to further the discussion of how an author’s work progresses over time, McPhee writes about how researching one story can often lead to new story ideas. In John’s case, a character he met while researching his quadruple profile led him to an entirely new project that eventually progressed even further when it was adapted into a feature film.

McPhee explores the topic of structure more explicitly in the book’s second essay, aptly and simply titled “Structure.” McPhee suggests that, after choosing a subject and collecting research material, a writer should then turn his or her focus to structure before beginning the bulk of the writing. A good structure is not only integral to a good piece of writing, it can also guide a writer through the rest of the process, thus preventing writer’s block. McPhee provides several structural examples for different stories and offers readers suggestions on how to develop a structure of their own. He also devotes time to discussing and comparing two ways of approaching structure: chronologically and thematically. McPhee then digresses into a story about the various computer programs he uses to help him order and organize his research material into a viable structure. Toward the end of the essay, he returns to his main suggestion for developing structure and encourages writers to settle on a strong lead and allow that opening to dictate the best possible form for their piece.

The next essay discusses the relationship between writers, editors, and publishers with an emphasis on McPhee’s personal experiences with his editors William Shawn and Robert Gottlieb, as well as with his publisher Roger W. Straus Jr. The essay explores the negotiation between writers and editors that occurs in order for the final piece to be the best it can be. McPhee’s stories emphasize the importance of a strong and healthy relationship between a writer and their editor or publisher. At the same time, he emphasizes the fact that a writer must maintain a certain level of freedom and ownership over his or her work, as it will be published under his or her name.

The essay “Elicitation” focuses on the interview process. John offers interviewing tips that he has picked up over the years by sharing stories of memorable interviews he has conducted. He explains his interview preferences and compares the difference in process that happens when a subject is reticent or forthcoming respectively. In particular, he compares his experiences interviewing Jackie Gleeson and Richard Burton in the 1960s. This essay also discusses how a writer should handle verbatim quotes. McPhee discusses the difference between managing a quote for clarity or readability and manipulating a quote to the point where it is no longer true or accurate.

“Frame of Reference” is a relatively short essay cautioning writers against the dangers of relying on cultural or social frame of reference in their descriptions. McPhee warns that this will date one’s work so that it is inaccessible to future generations who have different cultural touchstones. In addition, it places the onus of description, imagery, and evocativeness on the cultural icon, rather than on the writer’s abilities to paint with language.

The following chapter, “Checkpoints” discusses fact-checking in nonfiction. McPhee provides several lengthy examples to illustrate the complicated, fastidious, and involved process of fact-checking. These examples all serve to reinforce the importance of this stage in the process, whether a piece of writing be fiction or nonfiction. While a writer may have the pleasure of working with professional fact-checkers as McPhee has done, he also recounts his experiences of fact-checking his own work to demonstrate the importance of authenticity in nonfiction.

“Draft No. 4” discusses writer’s block, how to overcome it, and how McPhee moves through his process from drafts one to four. He emphasizes the first and fourth drafts in particular, as well as the importance of revision to the writing process. In his discussion of the fourth draft, he focuses on the importance of word choice and small details in the overall success of a finished piece. This leads into a discussion of copyediting and style as the final polishing stage.

Finally, the essay “Omission” focuses on the theme of writing as selection. John writes about an early experience writing a piece called “Oranges” in which he and his editor had to make difficult decisions about what to omit and include from his vast amounts of material. John writes about the idea that less can be more, and encourages writers to leave room for the reader to have his or her own experience and interpretation. He suggests an exercise in which one attempts to cut a certain number of lines from a finished piece to illustrate the importance and impact of selection and omission. John McPhee defines creative nonfiction as “not making something up, but making the most of what you have” (185).

More summaries and resources for teaching or studying Draft No. 4: On the Writing Process.

Draft No. 4: On the Writing Process from BookRags. (c)2022 BookRags, Inc. All rights reserved.