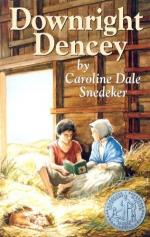 Nantucket is an island off the coast of Massachusetts. It is an eighteen-mile long stretch of sandy island that caters to seafarers and their families. It is said that Nantucket was formed when a spark from a white hot fire flew from Massachusetts out into the ocean. The author describes Nantucket: "Here were the New England character and hardi-hood, it's God-fearing and mental eagerness, yet all sensitively changed, individualized, so that they became Nantucket and no other" (Book II, Chap. 7, p. 41).

Unlike the other New Englanders, those living on Nantucket could not rely on the stony fields, land that would consistently produce a means for living. The people on Nantucket relied on the sea for their livelihood. Nantucket was an industrious area, supplying the continent and majority of the world with whale oil.

Nantucket is a real place. The author has taken the basic structure of the...