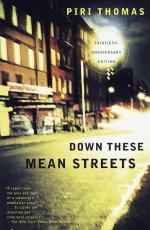 Down These Mean Streets Setting & Symbolism

Piri Thomas
This Study Guide consists of approximately 40 pages of chapter summaries, quotes, character analysis, themes, and more - everything you need to sharpen your knowledge of Down These Mean Streets.

The gang Piri joins along with Weneko and others.

The corner where Piri shines shoes. He notes it is not his corner alone but that he has to fight for it everytime he sets up his shoe shine business there.

A game among gang members. Friends throw insults back and forth. Piri notes it is sometimes dangerous and more than one person has lost a tooth over something said during the game.

Where Piri spends his childhood and where he returns after his family moves to Long Island and after his release from jail. Piri notes Harlem simply is not willing to give up its hold on most people and they find they cannot stay away.

The James Cliffordappears in non-fiction

The boat where Piri...