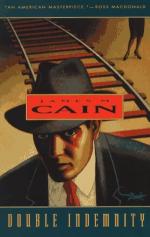 This detailed literature summary also contains Topics for Discussion and a Free Quiz on Double Indemnity by James M. Cain.

Double Indemnity, published in 1934, is Cain's second novel and is set in the young, booming city of Hollywood. In a city where insurance salesmen are close to the bottom of the social pecking order, Walter Huff rates as "average." Still, he is savvy enough to get through the door and get the prospect talking, except that when he makes a call to a certain Mr. Nirdlinger about renewing his auto policy, he ends up talking to his client's wife, Phyllis. Phyllis is attractive, but she looks a little washed out. She seems to have some interest in an auto policy for her husband, but she tells Walter she'll call him and let him know when he can come back.

When Walter returns, Phyllis flirts with him, and he finds himself attracted to her. His attraction, however, doesn't blind him to the fact that she wants to take out an accident insurance policy on her husband and then arrange an "accident" so that she can collect on the double indemnity insurance. For a long time, Walter has been pondering how he could beat the system and defraud the insurance company, so he agrees to be her partner in this crime. He insists that her husband has to die from an accident on a train. That way the payoff would be $50,000 ($690,000 in today's currency).

Over a period of several months, they hatch their plan, which involves staging Phyllis's husband's death by first killing him and then dumping him near the railroad tracks. Walter will then impersonate the husband, get on the train, make himself noticed, and then get off near the spot where the husband's body has been stashed.

Walter plants a careful alibi for himself, and with the help of Phyllis, does away with the husband, boards the train, and successfully impersonates Mr. Nirdlinger, making sure there are witnesses to his presence on the train. During the weeks after the crime, several people, like Phyllis's stepdaughter, and Keyes, the investigator at Walter's firm, raise suspicions about the "accident," but the most disturbing revelation to Walter is that some information he learns from her stepdaughter seems to suggest that Phyllis may have murdered her husband's former wife to acquire Nirdlinger and his money for herself. Walter is so bothered by his discoveries about Phyllis that he decides he has to get rid of her, and he sets up a meeting in a park. Phyllis doesn't arrive, but someone in concealment shoots Walter, wounding him. When he wakes up in the hospital, the insurance investigator visits him to tell him that he has the culprits: Nirdlinger's daughter and her boyfriend. Walter decides to confess and cut a deal with the investigator as follows: if the investigator makes arrangements for Walter to escape the country, Walter will deliver a signed confession to him so that the insurance company does not have to pay the claim.

The investigator agrees, the arrangements are completed, but after Walter boards a ship to Mexico, he discovers that Phyllis is also on the ship, and they both suspect that their aliases will not protect them from arrest once they reach their destination. They decide to commit suicide by leaping overboard.