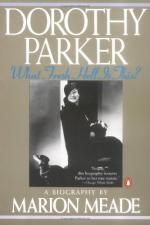 Dorothy Parker: What Fresh Hell Is This? Summary & Study Guide

Marion Meade
This Study Guide consists of approximately 81 pages of chapter summaries, quotes, character analysis, themes, and more - everything you need to sharpen your knowledge of Dorothy Parker.

Dorothy Parker: What Fresh Hell Is This? Summary & Study Guide includes comprehensive information and analysis to help you understand the book. This study guide contains the following sections:

This detailed literature summary also contains Topics for Discussion and a Free Quiz on Dorothy Parker: What Fresh Hell Is This? by Marion Meade.

Dorothy Parker, What Fresh Hell is This, A Biography by Marion Meade is a book written to chronicle the life and times of American writer Dorothy Parker. With a career that spanned over 5 decades, Parker wrote everything from soft verse to major motion picture movie scripts to short story fiction and was hailed as a legend within her own time.

Born into affluence, Parker grew up in New Jersey and New York and began working at a young age for magazines such as Vogue and Vanity Fair. She quickly established herself as a quick wit and garnered a reputation for herself as a sharp-tongued, wisecracking, and merciless observer and critic. She harnessed her talents and worked for much of her career as a theatre critic, but was most well-known for her poetry and fiction, much of which was cleverly disguised autobiography.

Rebellious by nature from a young age, Parker balked against the idea of her destiny being written for her. She was a woman ahead of her time who insisted upon grasping the pen for herself and carving out her own path. As such, she succeeded in creating her own niche in American Literature. She was called everything from the "brightest girl in America" to "the greatest female satirist of her age." Much of her material is feminist in nature, far before the notion of feminism or women's liberation was popular.

Parker was one of the founders of the legendary Algonquin Round Table, a gathering of the noteworthy literary personalities of the time. Most of the Round Tablers went on to great notoriety and were the elite crowd of writers, actors, artists and theatre critics of their time. Dorothy's crowd included names like F. Scott Fitzgerald, Robert Benchley, Earnest Hemingway, Aleck Woolcott, and Lillian Hellman. Dorothy spent most of the 1920's carousing with these characters, and in many cases, their antics were as legendary as their art.

Like many of the Round Table members, Dorothy developed a life-long love affair with alcohol and was a substance abuser for most of her life. She dealt with depression and attempted suicide on several occasions. Her first marriage to Eddie Parker was practically a study in co-dependency, but her second marriage to actor Alan Campbell was far healthier. Dorothy and Alan made their way from the East Coast to the West Coast and began a career as a husband and wife writing team for Hollywood. Although they married and divorced twice, Alan and Dorothy lived and worked together for the rest of their lives.

During their time in Hollywood, Dorothy became involved with many political causes and was a fierce advocate against fascism. Unwittingly, Dorothy fell into ties with the Communist Party just before the age of McCarthyism, and was blacklisted from Hollywood for a time. She was eventually absolved of all incrimination, and was through the whole of her life an intense defender against all forms of injustice.

Dorothy outlived Alan by 5 years, and continued to work up until the end of her life. When she died, she willed her estate to Martin Luther King, Jr. and the NAACP, most likely because she felt the civil rights movement was the best fight against injustice of the age. Dorothy received countless awards through her life, and even fifty years after her death, the numbers of her fan base continue to increase. Her work perhaps continues to sell in a contemporary market because her writings are timeless and her messages universal.

More summaries and resources for teaching or studying Dorothy Parker: What Fresh Hell Is This?.

Dorothy Parker: What Fresh Hell Is This? from BookRags. (c)2022 BookRags, Inc. All rights reserved.