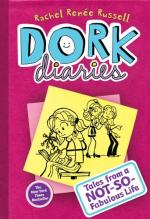 Rachel Renee Russell
This Study Guide consists of approximately 33 pages of chapter summaries, quotes, character analysis, themes, and more - everything you need to sharpen your knowledge of Dork Diaries.

This detailed literature summary also contains Quotes and a Free Quiz on Dork Diaries: Tales From a Not-So-Fabulous Life by Rachel Renee Russell.

NOTE: Due to the structure of this novel, this study guide is divided up according to page numbers. Quotes are attributed as such. This guide specifically refers to the 2009 First Aladdin/Simon and Schuster edition.

“Dork Diaries: Tales from a Not-So-Fabulous Life” is a young adult novel by Rachel Renee Russell which recounts 14-year-old Nikki Maxwell’s first month and-a-half in a new school where she must handle bullies, boys, and an art competition. The novel begins shortly before Nikki is set to begin school at Westchester Day School. Her father, an exterminator, has secured a contract to handle the school, and a scholarship for Nikki to attend the school.

Nikki, though she is embarrassed as to how she is able to be attending the wealthy school, is determined to make the year as good as she can. She wants to buy an iPhone and a designer wardrobe, both of which she believes will make her popular. However, her mother will not buy her an iPhone or a designer wardrobe. She buys Nikki a diary instead. At first, Nikki is disgusted, but then decides the diary is the perfect place to write down her thoughts and feelings – even though it will not be publicized on the internet.

At school, Nikki is not the only new girl. MacKenzie Hollister, gorgeous and utterly cruel, also begins attending Westchester Day. She instantly becomes popular, attracts a clique of friends, and begins to make fun of all other girls for their outfits, fashion, and appearance. She soon sets her sights on Nikki, especially when she discovers that Nikki also wants to enter the Avant-Garde Art Competition at the beginning of October. Panicked, Nikki signs up to be a Library Shelving Assistant instead, hoping to avoid MacKenzie’s cruelty.

Working in the library, Nikki meets and befriends Chloe and Zoey, two girls who love reading and who hate MacKenzie. Chloe and Zoey reveal that whatever assistants distinguish themselves the most for the librarian, Mrs. Peach, will be taken on a field trip to New York for National Library Week. The girls believe that tattoos about reading will propel them to the top of the list. When the parents of Chloe and Zoey say no to tattoos, they plan to run away and hide out in New York. This worries Nikki.

Nikki’s little sister, Brianna, annoys Nikki at breakfast by drawing a face on her hand. This gives Nikki the idea of drawing temporary tattoos on Chloe and Zoey – which in turn prevents them from running away. Word soon gets out that Nikki can draw tattoos. Nikki, Chloe, and Zoey then begin a project where charitable book donations will earn a person a tattoo. The girls instantly become popular, which goes to the heads of Chloe and Zoey. They overbook Nikki, and begin to argue with her about not being able to keep up with tattoo appointments. Nikki finally has enough and quits.

Through it all, only Brandon, a cute and kind boy, stands by Nikki, whether it is against MacKenzie or against the student body. He ends up being the only person to stand by Nikki on her worst day ever. She is late to school, must catch a ride with her dad in his exterminator van, her entry to the art competition is accidentally destroyed, and MacKenzie cruelly mocks her for her dad’s job and her ruined painting. Nikki is drenched in the rain, and Brandon appears with an umbrella to walk her inside. When Nikki sees graffiti on her locker, calling her “Bug Girl”, she has had enough. She runs to the office to call her parents to pick her up.

Nikki convinces her parents to let her transfer schools. They go in early the next day to complete paperwork. Nikki goes past the art displays to see who has won, and is stunned to see a composition of black-and-white photos of the tattoos she has created, along with a sign marking her as the artist, and the first-place ribbon. She decides not to transfer schools, knowing she has friends after all.

She learns that Brandon, Chloe, and Zoey, upon hearing about her worst day ever, came together to make sure that Nikki would still be entered in the competition. Brandon took photos of many of the tattoos she created, to let those be the entry. Chloe and Zoey apologize for taking advantage of Nikki, making sure Nikki knows their friendship with her is what truly matters. Nikki gladly forgives them and thanks them. She is also thrilled when Brandon asks to be her lab partner in Biology. She has come to admire Brandon for his confidence: he doesn’t care what anyone else thinks of him. The only opinion that matters is his own. Nikki knows she herself needs to learn to be this way.

More summaries and resources for teaching or studying Dork Diaries: Tales From a Not-So-Fabulous Life.