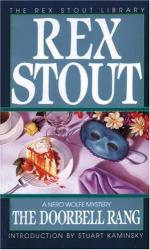 Although The Doorbell Rang was published thirty years ago, the events of the intervening decades have not made it irrelevant, but rather even more suitable for discussion. In his very last novel (A Family Affair, 1975), Stout shows Wolfe beside himself with excitement at the possibility that he might get a crack at the Watergate investigation. Wolfe is ever-alert when it comes to abuses of trust by elected or appointed officials of the government, and his words and deeds have lost none of their punch.

Aficionados of the detective novel will enjoy talking about this unusual example of the genre, in which the inevitable murder and exposure of the culprit are incidental to the real conflicts. Purists may find it stimulating to argue about whether this is, strictly speaking, a murder mystery.

1. Does Stout assign a definite and plausible motive to Rachel Bruner?

Does he expect us...