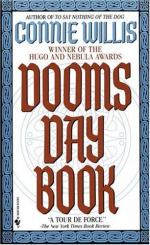 Connie Willis
This Study Guide consists of approximately 35 pages of chapter summaries, quotes, character analysis, themes, and more - everything you need to sharpen your knowledge of Doomsday Book.

This detailed literature summary also contains Topics for Discussion and a Free Quiz on Doomsday Book by Connie Willis.

James Dunworthy, a faculty member of the Oxford History Department, enters a viewing chamber where his friend, Mary Ahrens, is watching the preparations for sending a historian named Kivrin to 1320. The policy has been not to send historians to the medieval period because of the danger to the historian, but the head of the department, Mr. Basingame, is out of town and has left a faculty member named Gilchrist in charge. Gilchrist has overridden the policy to allow Kivrin to go.

As soon as she is through the net, Dunworthy and Mary go to a nearby pub to wait for Badri, the tech in charge of the drop, to get a definite fix on Kivrin's location so she can be picked up in two weeks. Dunworthy admits to being very worried because drops to such distant times have not been attempted. While Mary is reassuring him, Badri rushes in, mutters about a problem and rushes back out with Dunworthy and Mary in pursuit. At the lab, Badri says that he has a fix on Kivrin's location but says again that there's a problem, then faints over the console. Mary, a physician, calls for medical transport and Dunworthy travels to the hospital with Badri. There, it's determined that Badri has a virus and the entire team is quarantined for a period of time. When a second case is reported, the entire city is locked down in quarantine status and the team released with orders to return the following day.

Meanwhile, Kivrin arrives and decides she's at the correct time of year but that there's nothing to definitively say she's in 1320 and realizes she has arrived a short distance from the road onto which she'd expected to be dropped. She begins trying to move her possessions, including a wagon, to the road but soon finds she's feeling ill. She passes out and the next days pass in a delirium of fever and pain. When she wakes, she feigns amnesia and quickly becomes fond of two little girls in the household. She knows there's some problem, but days pass before she figures out that the family has come to this remote village in an effort to escape the plague. Kivrin only then learns that she's missed the target by years and is landed in the middle of the Black Death plague of 1348.

Meanwhile, the plague is sweeping the present and Dunworthy is only one of hundreds who fall ill. Like in the 1300s, the victims blame a great many things for the illnesses until it's finally discovered that the virus originated at an archaeological dig of a church burial ground from the 1300s. Gilchrist, in reaction to public demand, shuts down the time travel lab, and Dunworthy knows that Kivrin is now stranded in the 1300s. With the encouragement of Mary's great-nephew, a young boy named Colin, Dunworthy rounds up a team to mount a rescue mission. The new drop is successful, and Dunworthy locates Kivrin, though not in time to save Kivrin's own nightmarish days of nursing the dozens of residents of the village and seeing them all die. Having been inoculated against the virus before her trip through the net, Kivrin is the sole survivor. As she, Dunworthy and Colin prepare to step back into the year 2054, Kivrin says that she is still glad she came because she alone can give witness to the lives of those who died.