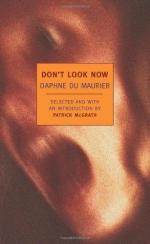 Daphne Du Maurier
This Study Guide consists of approximately 49 pages of chapter summaries, quotes, character analysis, themes, and more - everything you need to sharpen your knowledge of Don't Look Now.

Moran is a secondary school teacher of English and American literature. In this essay, Moran examines the ways in which du Maurier's story dramatizes the human desire to impose order on strange and unexplainable situations.

In The Life of Samuel Johnson (1791), the biographer James Bos well recounts a remark made by the subject of his book:

It is wonderful that five thousand years have now elapsed since the creation of the world, and still it is undecided whether or not there has ever been an instance of the spirit of any person appearing after death. All argument is against it; but all belief is for it.

In this case, argument and belief are offered as contradictory approaches to the issue of ghosts: the fact that there has been no empirical evidence confirming their existence does not deter many people from a nagging suspicion that there may be...

Don't Look Now from Gale. ©2005-2006 Thomson Gale, a part of the Thomson Corporation. All rights reserved.